Long-term report: A month of doing pick-up things in our SsangYong Musso LWB 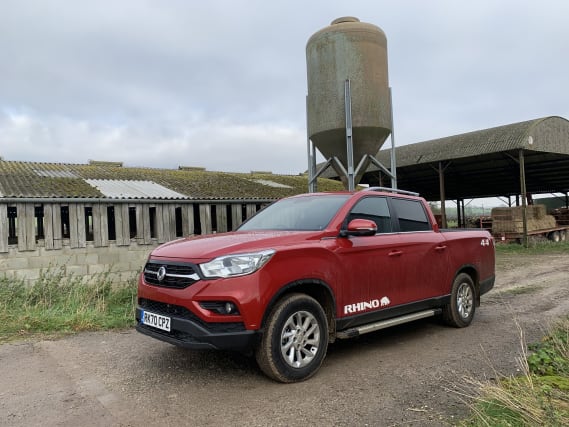 Two months into pick-up ‘ownership’, I’d realised a rather startling fact that I hadn’t actually really done any true ‘pick-up’ tasks with ‘my’ SsangYong Musso.

For several weeks it spent most of its time plodding up and down the M1 for various work events – something it’s impressively capable at doing – as well as last month being used as a city car around Central London.

All well and good, but things that a Fiesta could happily and capably do. So this month I endeavoured to try and do the opposite by doing as many truck things as possible. And thankfully, living in rural North Yorkshire, it’s not a difficult task.

I’ve mentioned it before, but pick-ups are a dime and a dozen around here, and as winter creeps in and the roads get ever muddier, it’s easy to see why. Living on a farm has also allowed it to be put to good use.

For starters, the Musso recently starred in an off-road twin test with a Ford Ranger Raptor – a pick-up that couldn’t be any more different to the SsangYong if it tried. With its ludicrous bodykit, motorsport-inspired suspension setup, it should have trounced the SsangYong. But do you know what? It really didn’t. Granted the South Korean pick-up couldn’t do the silly drifts that the Ranger manages, but it could do everything that truck could in a VERY muddy field, and it didn’t once get stuck.

Elsewhere, I’ve been making use of the Musso’s huge pick-up bed to help collect some corn seed for the farm (I know, I’m conforming to all the rural stereotypes here), which was a big builder’s bag that presented the first opportunity to put my pick-up to the test when laden. Not only did the bag of seed fit in with ease to the Musso’s vast 1.61m-long bed (it was dropped in by a forklift if you’re wondering how on earth it got in there!), but it also showcased the improvement in the ride when it had some actual weight to it.

When it’s just me in it, the Musso suffers from the usual jiggly ride that affects unladen pick-ups, which is never uncomfortable, but a touch irritating. But with 500kg of corn seed onboard, it made an instant difference to the smoothness, if a noticeable dent in the fuel economy stakes. But in long-wheelbase Rhino trim, which this Musso is in, it could handle more than double that weight with a payload of up to 1,140kg. Must try harder to find something heavier…

That large pick-up bed has also come in useful recently with the purchase of a new mountain bike that needed collecting. It was one that’s noticeably bigger than previous bikes I’ve had, and it would struggle to fit in plenty of cars on the market today, even with the front wheel removed. But there were no issues here as it was almost a perfect size for the bike to slot in. I do have a tailgate pad that hangs on the back of it, but it wasn’t even needed here as the bike fitted in the back with ease.

And last but not least on the list of pick-ups was an unexpected one – towing. Despite coming with a tow bar on the back, it’s something I never anticipated would get used. That wasn’t until Dad’s six-month-old Volkswagen Amarok pick-up decided to break down, leaving him without a vehicle to tow – something he does a lot to deliver logs. With the Musso to the rescue, it would be a good chance to gauge his opinion on it.

He came back impressed after trying it. Commenting on how comfortable the ride was, how good the touchscreen was and also its ease of driving, considering its size (it’s 20cm longer than an Amarok). His only criticism was that it lacked the power of his Volkswagen, though that’s no surprise given that it’s almost 80bhp more powerful.

So after a month of being put to its extremes – probably more than plenty of pick-ups will be, the Musso has once again impressed. And with winning my Dad over – someone that’s a bit of a pick-up snob – it’s yet another merit. Let’s see if this can continue over the coming months…