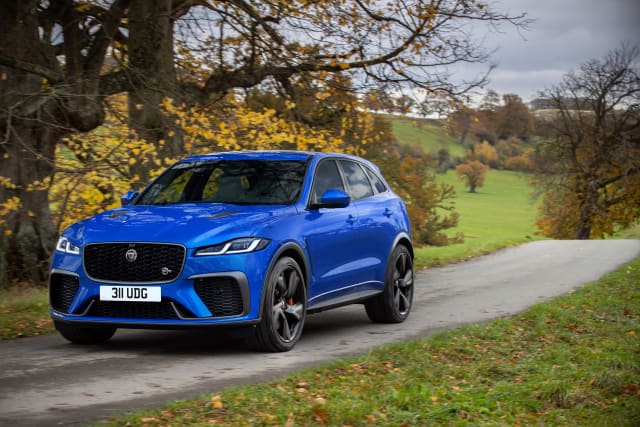 It retains its predecessor’s 5.0-litre supercharged V8, which brings 542bhp and 700Nm of torque. This helps the SVR to deliver a 0-60mph time of 3.8 seconds – three-tenths quicker than the older car – and a top speed of 178mph.

Despite this, CO2 emissions have been reduced from 281 to 275g/km while fuel economy stands at 23.1mpg.

Jaguar’s engineers have also tweaked the engine’s software to return a sharper throttle response, while the suspension, steering and exhaust have also been revised. A new Dynamic Launch feature ensures that there’s no loss of power during gear changes, helping to reduce the car’s acceleration time. As before, the F-Pace SVR uses an eight-speed automatic transmission.

The brakes have been improved, too. With 395mm discs at the front and 396mm units at the rear, the whole system has been helped by a new Integrated Power Booster which helps to make the brake pedal shorter and more effective.

The exterior has been tweaked through the inclusion of a revised bumper design with blade-like elements and a larger lower intake which helps to increase airflow to the engine. The bonnet design has been elongated too, while the rear lights feature Jaguar’s ‘double chicane’ graphic which first saw use on the firm’s electric I-Pace. New 22-inch forged alloy wheels are available as well.

Inside, the new F-Pace SVR features a 12.3-inch driver display situated in the main instrument binnacle, while as new 11.4-inch curved glass touchscreen in the centre of the cabin features Jaguar’s latest Pivi Pro infotainment system. Both Apple CarPlay and Android Auto are included, too.

A variety of high-end materials are used throughout the cabin with areas such as the seat and door inserts finished in Alcantara, while the central cubby is trimmed in leather.

The new Jaguar F-Pace SVR is priced from £77,595 and is available to order now.