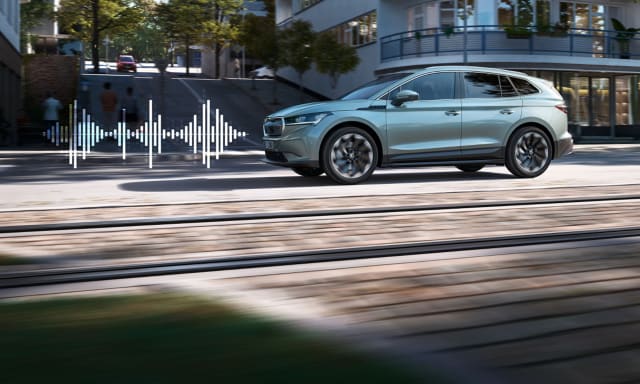 Skoda has revealed the sound its new electric vehicle will make to warn pedestrians it’s approaching.

Under new rules, electric vehicles must emit a sound, known as an Acoustic Vehicle Alert System (AVAS), to improve their safety because electric motors do not make much sound.

Skoda employed the help of professional music composers, who worked with the Czech firm’s development centre to create ‘a more electronic and futuristic feel’ rather than imitating the noise of a traditional engine.

The idea was to create something that was ‘easy on the ear yet noticeable enough to make other road users and pedestrians aware of its presence’.

The system has been built into the front of the Enyaq, with the speaker and electronics built into a small, one-litre box that is mounted onto the battery cooling module.

Skoda says this design means no additional speakers are required, minimising the additional weight added to the vehicle.

Michael Oeljeklaus, Production and Logistics board member at Skoda, said: “The Enyaq iV is Skoda’s first series-production model that was designed as an all-electric vehicle from the outset.

“This means our new SUV also places entirely different demands on manufacturing processes and production sequences than models with combustion engines. This is also reflected in the extensive preparation and conversion measures that we have been implementing at our main plant in Mladá Boleslav since last summer.

“Today’s start of production of the Skoda Enyaq iV, on the only production line in the Group for vehicles based on the MEB and MQB, is a very special moment for our entire team.”

Production of the Skoda Enyaq has already begun at the firm’s Mlada Boleslav factory in the Czech Republic, with deliveries expected in the UK in the spring.

It will be offered with two battery sizes and four power outputs, with either rear- or four-wheel-drive. Depending on the configuration, the maximum battery range is 316 miles.