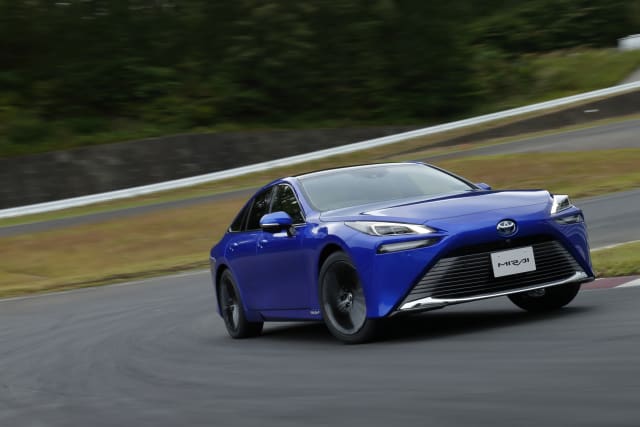 Toyota has continued to progress with its hydrogen plans through the unveiling of its second-generation Mirai.

The new model, which replaces a car first introduced in 2014, brings a greater range as well as a more spacious cabin.

It retains its fully hydrogen-powered setup, using a combination of hydrogen and oxygen – mixed in a fuel stack – which then generates electricity to drive a motor and, in turn, moves the car. A battery system also recovers and reuses the energy usually lost during braking and decelerating.

Thanks to a dual-tank setup, the Mirai will achieve around 403 miles from a full fill of hydrogen. The two tanks offer the ability to hold 5.6kg of hydrogen, compared with 4.6kg in the old Mirai.

The fuel cell stack has been made smaller and uses fewer cells, but thanks to advancements in technology, delivers more power than before – up to 128kW from 114kW.

A new catalyst-type filter has been incorporated into the air intake, too. When air is drawn into the vehicle to supply the fuel cell, an electric charge on the non-woven fabric filter element captures microscopic pollutants, effectively cleaning the air as it goes.

It’s also based on Toyota’s new modular GA-L platform, which helps to allow for more interior space. The fuel cell stack has also been from behind the cabin to the area of the car where the engine would traditionally be located, further boosting legroom for those sitting in the back.

The high-voltage battery and electric motor are located behind the rear axle, which helps to give the Mirai even 50:50 weight distribution.

The new car’s height has been reduced by 65mm over the older Mirai, though the wheelbase has been increased by 140mm. The track width has also been boosted by 75mm, while either 19- or 20-inch wheels are now available.

Currently, there are 11 hydrogen filling locations in the UK, though more are planned. The current price to fill up is between £10-£15 per kilo, resulting in a full fill-up for the Mirai costing between £56 and £84.

Toyota is targeting a 10-fold increase in sales volume, with the new Mirai being offered as a more affordable vehicle thanks to a selling price reduced by around 20 per cent. Toyota states a starting price of €63,900 (£57,451).

How to keep your car battery alive during a cold snap