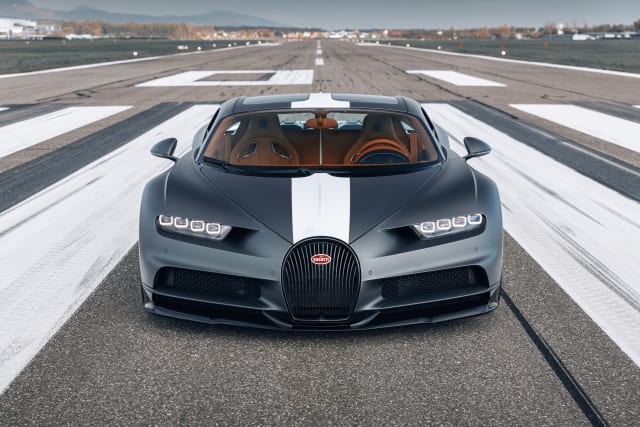 Bugatti is honouring famous racing driver pilots from the last century with a limited-edition version of the Chiron.

Called the Chiron Sport “Les Légendes du Ciel”, it pays tribute to racing drivers who also had close ties with aviation. Albert Divo and Robert Benoist, for example, flew for the French Air Force yet both had sparkling racing careers in the 1920s.

Bugatti itself has its core in aviation, with founder Ettore Bugatti designing aircraft engines in 1915 before developing an entire aircraft to break speed records in 1937. The latter project, however, was stopped due to the outbreak of the Second World War.

The radiator grille mesh is made of laser-cut aluminium, with the pattern of this area reflected on the leather seats inside the car. The door sills are crafted from brushed aluminium and they too feature a bespoke logo. Each door panel receives a racing scene which has been hand-sketched, depicting a racing scene between a Nieuport 17 aircraft – a French biplane built from 1916 – and a classic Bugatti Type 13.

Covering the huge quad-turbo W16 engine is a cover made of black exposed carbon fibre, while the black-coated exhaust trim covers have been created through 3D printing. The engine itself produces 1,479bhp and 1600Nm of torque, resulting in a top speed of 261mph.

Just 20 examples of the Les Légendes du Ciel will be produced, with each costing 2.88 million euros (£2.572 million).