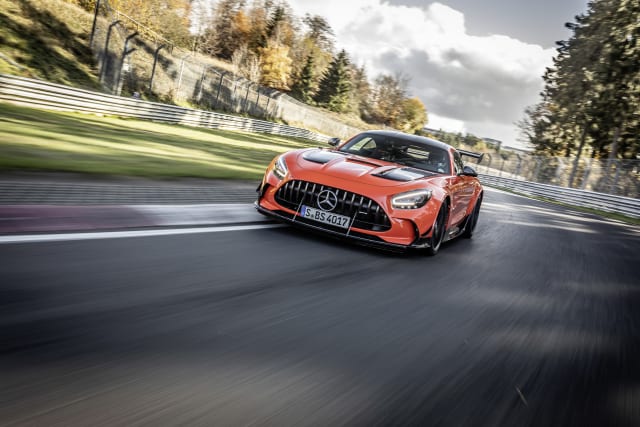 The Mercedes-AMG GT Black Series has set the record for the fastest production car to lap the Nurburgring Nordschleife.

It set an ‘official measured and notarised certified’ time of six minutes 43.616 seconds for the lap without the T13 straight and six minutes 48.047 for the complete circuit.

By doing so, the GT Black Series has shot straight to the top of the records for cars in the street-legal ‘sports car’ category. Mercedes-AMG GT3 racing driver Maro Engel was behind the wheel during the record-breaking runs.

However, no additional modifications were made to the car in order to get it to achieve the time. However, the adjustable coilover suspension – fitted to the regular production car – was lowered by 5mm at the front of the car and 3mm at the rear, while the camber was adjusted to its maximum possible mode. The anti-roll bars were also put into their hardest, most aggressive setting.

Maro Engel said after the lap: “That was a really impressive ride.

“With speeds of up to almost 270 km/h (167mph) in the Kesselchen section of the track or well over 300 km/h (186mph) on the long Döttinger Höhe straight, the AMG GT Black Series is significantly faster than my GT3 race car. To finally drive around the Nordschleife in 6:48.047 minutes with a production road car in these track conditions is really awesome. Like my GT3 race car, the AMG GT Black Series offers a lot of adjustment possibilities, all of which enabled me to create a setup that was tailor-made for me.”

A factory-fitted Track Pack was also added to the car – though this is also available for the regular vehicle. It brings rollover protection as well as sticky Michelin Pilot Sport Cup 2 R MO tyres.