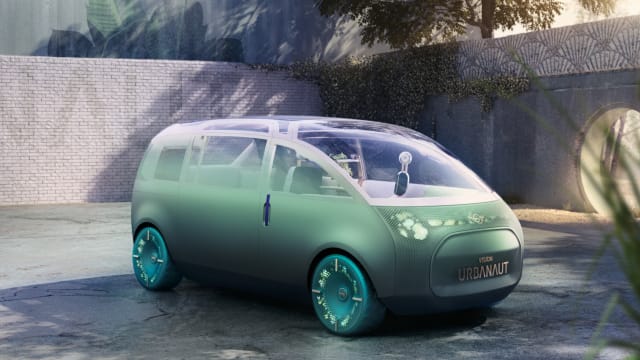 Mini has given a glimpse at the future of its vehicles with this – the Vision Urbanaut.

Designed to offer maximum interior space, the concept has been created as a vision of how cars could be used in scenarios above and beyond just driving.

It’s based around three Mini ‘moments’. The first, ‘Chill’, turns the car into a ‘retreat’ according to Mini, where users will be able to relax or work with full concentration. ‘Wanderlust’, in contrast, will see the driver utilise the automated functions of the car or take the wheel themselves.

Finally, ‘Vibe’ opens the car to its maximum amount to better allow people to spend time with one another.

Powered by an electric – though unspecified – powertrain, the Urbanaut also utilises sustainable materials throughout its design. When the car is at a standstill, the dashboard can be lowered and turned into a daybed while the windscreen can be opened upwards to create what Mini calls a ‘street balcony’.

The central section of the car has been designed to be open plan, offering quick access to all of the major seating areas, while Mini’s famous circular instrument is placed on the table in the centre of the car.

A Mini ‘Token’, meanwhile, is what users will access all of the car’s major functions through and is where they’ll activate the three preconfigured ‘moments’, too. Users can also specify their desired fragrance as well as the level of ambient lighting and even the music.

Outside, the Urbanaut showcases an evolution of the traditional Mini lights and grille, while the dynamic matrix headlights and rear lights reflect the different setting that the car is in. The wheels – dubbed ‘skateboard wheels’ by Mini – are transparent and illuminated from the inside, varying their appearance depending on which ‘moment’ the car is in.

There are no plans as yet to put the Urbanaut into production, with Mini using the striking concept as a showcase of its future plans instead.