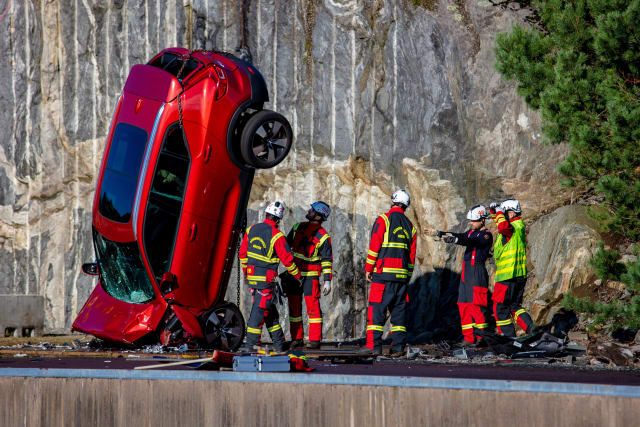 Volvo has dropped several of its new cars from 30 metres to help emergency services to better prepare their skills for extreme crash scenarios.

The test was able to simulate the damage incurred during the worst crashes, such as single-car accidents at high speeds, or when a car hits a truck when travelling at high speeds too.

In such situations it's likely that vehicle occupants will be in a critical condition, making it vitally important that rescue cues get them out of the car and to a hospital as quickly as possible using hydraulic rescue tools.

"We have been working closely together with the Swedish rescue services for many years," said Håkan Gustafson, a senior investigator with the Volvo Cars Traffic Accident Research Team.

In order to save another million more lives on our roads, we need to start a new global safety movement. We can only do this by joining forces and sharing the responsibility of doing what it takes to get there. #ForEveryonesSafety

Usually, rescue workers get their training from scrapyard vehicles. However, as these cars are often much older than those currently on the roads, they often differ considerably when it comes to overall durability and construction as a whole.

Volvo decided to change things up by dropping some of its new cars from a crane in order for emergency crews to become more familiar with the way modern vehicles change in the event of a crash.

A total of 10 cars were dropped, with all findings from both the crash and resulting extrication work will be collected into a research report. It'll then be made free to access to rescue workers elsewhere.

Gustafson added: "Normally we only crash cars in the laboratory, but this was the first time we dropped them from a crane.

"We knew we would see extreme deformations after the test, and we did this to give the rescue team a real challenge to work with."