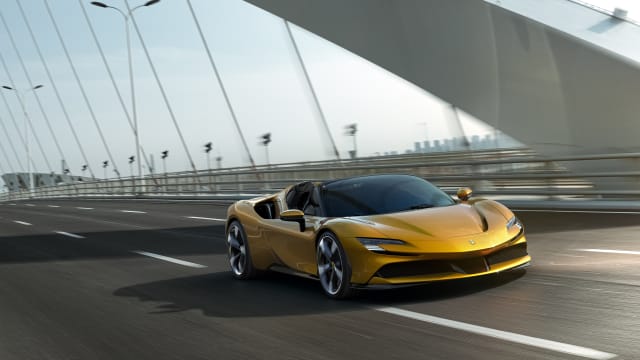 Ferrari has introduced a new convertible version of its SF90 supercar – the SF90 Spider.

It utilises a retractable hard-top set-up which allows the cabin to be better insulated from outside noise than other drop-top methods. It can be raised or lowered in just 14 seconds and can be operated when on the move, too. Thanks to a lightweight aluminium construction the roof weighs in around 40kg lighter than a conventional retractable hard top.

Underneath the SF90 Spider uses a plug-in hybrid setup – a first for a Ferrari production spider model. It combines a V8 engine with two electric motors at the front of the car linked to a 7.9kWh battery. It means that the SF90 Spider can travel up to 15 miles on electric power alone.

However, the motors and batteries can also assist in the car's performance. As a result, the SF90 Spider will go from 0-60mph in under 2.5 seconds before hitting a top speed of 211mph. In total, the combined power output is 986bhp, driven to the wheels via an eight-speed dual-clutch gearbox.

Electronic traction control, torque vectoring and brake-by-wire control have all been fitted to help the car manage both the engine's power and the energy generated by the electric motors to ensure that all types of drivers are able to access the car's potential.

Future and innovation: the #FerrariSF90Spider is #Ferrari's first
production plug-in hybrid spider, designed for owners that desire the
thrill and versatility of open-top driving and supreme V8 performance.
Prepare to go beyond imagination. https://t.co/EtPcJHpeEppic.twitter.com/HXNAnwuYY1

Inside, there's a single 16-inch high-definition screen which is curved towards the driver to make it easier to read. It's configurable, too, and the driver is able to change the readouts displayed on the screen to their individual choice. In default modes, however, it features a large central rev counter – in traditional Ferrari style – with a navigation display on one side and battery charge indicator on the other. It's backed by a head-up display which projects key information within the driver's field of vision.

The steering wheel, meanwhile, uses touch commands which allows the driver to control various aspects of the car's setup. All of the major functions including headlights, windscreen wipers and indicators are located on the wheel, as is the Manettino dial which changes the car's driver modes.

In the middle of the cabin, there's a modern take on the traditional 'open gate' manual gearbox, albeit changing the automatic transmission's settings. Below this is a storage area for the key, which has been designed to replicate the 'Prancing Horse' badge on the bonnet.