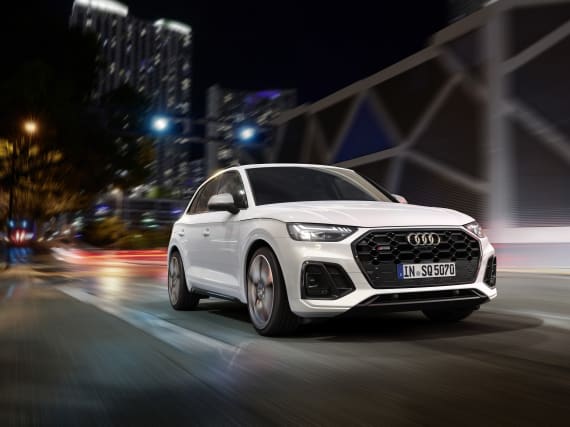 Audi has facelifted its SQ5 performance SUV, bringing tweaks to the engine as well as a variety of styling updates.

Underneath the bonnet of the SQ5 sits the same 3.0-litre turbocharged V6 diesel engine as before, but it has now been refined to deliver torque across a wider range while also bringing peak power earlier.

Peak power stands at 336bhp and 700Nm of torque, driven to all four wheels via an eight-speed automatic gearbox.

The engine is also fitted with a 48-volt mild-hybrid system which helps to reduce emissions and fuel consumption. Linked to an electrically powered compressor, the system integrates a belt alternator starter with a lithium-ion battery which allows the car to recover energy lost during deceleration. It also allows the SQ5 to coast with the engine switched off for up to 40 seconds, therefore decreasing fuel use.

Audi says that the system has the potential to reduce fuel consumption by up to 0.7 litres for every 62 miles driven.

In addition, an electric motor which also runs on the 48-volt system can help bridge the gaps in torque left by the turbocharger, sharpening acceleration and throttle response.

When it comes to the exterior, the SQ5 stands on 20-inch alloy wheels as standard, while large side air inlets help to break up the look of the front bumper. There’s also a matte aluminium strip at the rear, sitting above a diffuser insert and chrome oval tailpipes.

Matrix LED headlights are standard on all SQ5 models too, while inside all cars receive a 10.1-inch infotainment system as before, bolstered by a 12.3-inch virtual cockpit setup ahead of the driver.

Audi has also stated that given uncertainty over Brexit negotiations, it “guarantees it will not pass on any potential post Brexit tariffs for all orders placed before 17:30 on December 2, 2020”.