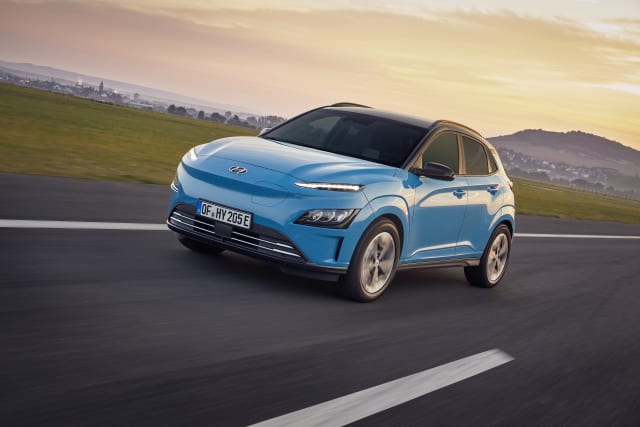 The front end of the car now incorporates a noticeably closed-off grille, which is framed by new LED daytime running lights. The charging port for the car remains on the nose of the Kona too, making it easier to access.

The updated Kona also ditches the plastic wheelarch trim pieces of its predecessor, instead favouring a cleaner, body-colour painted look instead. The redesigned look also improves the car’s wind resistance.

A new functional air intake in the lower bumper gains horizontal satin accent bars for a more noticeable look, too. Meanwhile around the back, there’s a redesigned bumper with new stretched lights.

Overall, the new Kona Electric is now 25 millimetres longer than the car it replaces, while five new exterior colours have been added to the car’s list of paint schemes, bringing the total to 10.

Inside, there’s a 10.25-inch digital cluster in front of the driver, while a 10.25-inch infotainment screen is carried over from the previous Kona Electric. It’s here where you’ll be able to access satellite navigation and media functions, while both Apple CarPlay and Android Auto are included as standard.

A new Bluelink upgrade allows owners to control certain aspects of the car with their phone. They can check, for instance, the car’s battery levels as well as charging times to fully replenish the batteries.

The Kona Electric retains the previous generation car’s battery options, with a long-range 64kWh version bringing a range of 300 miles, and a smaller 39.2kWh variant delivering 189 miles from a single charge.