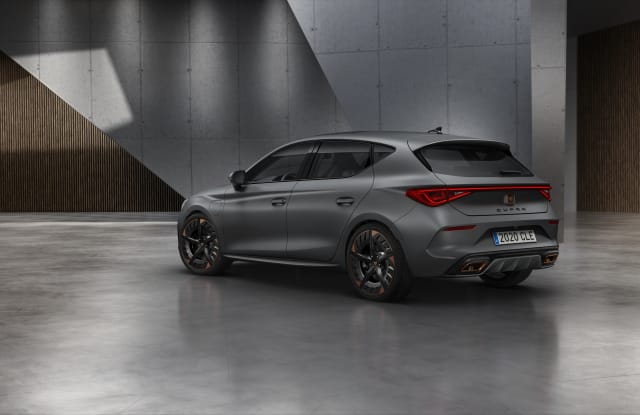 Cupra has announced further details about its new Leon hot hatch, as well as introducing a new plug-in variant.

Based on the latest fourth-generation Leon, the e-Hybrid – priced from £34,495 in hatch form and £35,525 for estate – combines a 1.4-litre petrol engine with an electric motor and 13kWh battery pack to produce 242bhp and 400Nm of torque. It’s capable of driving on electric power alone for up to 37 miles too, while returning up to 217.3mpg combined. CO2 emissions stand at 30-31g/km.

When the battery needs recharging it can be topped up in as little as three hours and 42 minutes via a conventional home wallbox. The Cupra Leon e-hybrid also starts up in all-electric mode, then switches to hybrid mode if the battery’s energy levels drop below a certain level.

The exterior of the car features 19-inch machined black and silver alloy wheels, while a rear diffuser with twin exhaust pipes give the car a distinctly sporty appearance. Cupra’s now-trademark copper detailing has been used across the car’s exterior, too.

Inside, it features bucket seats embossed with the Cupra logo, as well as a leather-trimmed steering wheel and sport pedals. It also benefits from a 10-inch infotainment setup with both Apple CarPlay and Android Auto, as well as a seven-speaker audio system.

Higher trim levels bring features such as a heated steering wheel, wireless smartphone charging and adaptive cruise control, among many others.

The Cupra Leon is also available with a more conventional powertrain setup, utilising a powerful 2.0-litre turbocharged petrol engine with 296bhp. Prices for this version start from £35,000.

A more potent version packing 306bhp will also be available soon – albeit only as in estate form – bringing enhanced performance as well as all-wheel-drive. Prices for this are due to be released shortly.