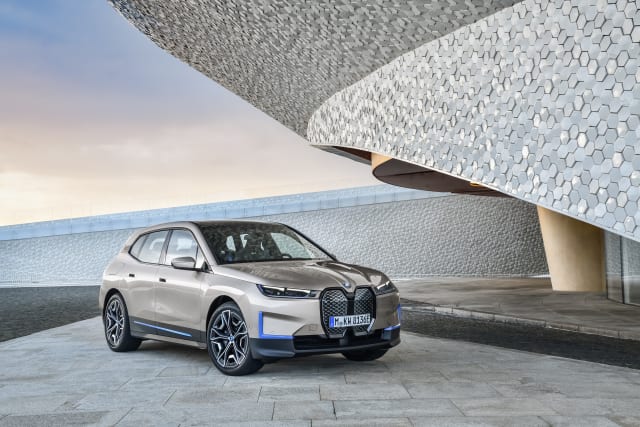 BMW has unveiled its new electric iX SUV which is set to take its place atop the firm’s range of EVs.

Set to go on sale late next year, the iX sits on a bespoke electric platform and utilises two electric motors driving all four wheels. In its most powerful form, it’ll deliver up to 500bhp.

It means that the iX will be able to go from 0-60mph in under five seconds, yet should be able to return more than 300 miles from a single charge. BMW has designed the iX to be able to receive DC charging up to 200kW, which would allow the battery to be taken from 10 to 80 per cent in just under 40 minutes.

BMW says that via a higher-powered 11kW wallbox, a full charge will take less than eleven hours.

Introduced to rival the likes of Audi’s e-tron and the Mercedes-Benz EQC, the iX arrives with space for five people with exterior proportions similar to that of the firm’s X5, while a tapered roofline means it sits at close to the same height as the coupe-esque X6. The whole car is built around a new aluminium platform, while a lightweight carbon fibre reinforced plastic (CFRP) structure is placed on top. The body, meanwhile, uses aluminium, more CFRP and composite plastics.

The front of the car incorporates the ultra-large grille seen on other recent BMW models and it’s here where the cameras, radars and sensors utilised by the driver assistance systems are fitted.

The interior, meanwhile, lacks a central tunnel which helps to create a spacious environment while also bringing extra legroom for those sitting in the back. The whole cabin has been designed with a minimalist approach, which is why the speakers, for instance, are integrated to be out of sight. The infotainment system is accessed via a curved digital panel, while the hexagonal steering wheel gives access to many key controls.

There has been no indication on price for the new iX yet, though it’s likely that these will be disclosed closer to the car’s full introduction.