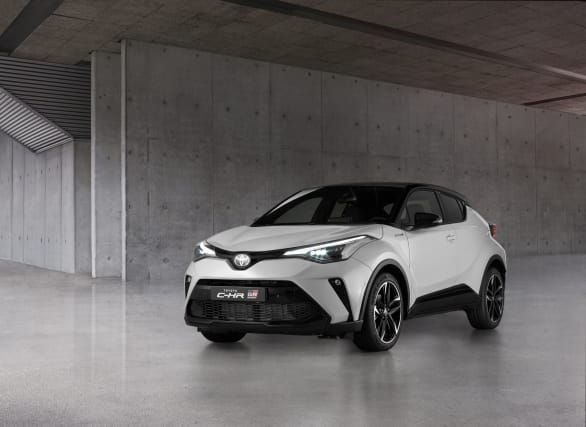 Toyota has bolstered its C-HR’s trim levels with a new GR Sport specification.

Aiming to bring some of the looks of the firm’s sportiest models to the C-HR crossover, the GR Sport trim brings additional styling touches such as a black finish for the headlight and fog light housings, as well as on the central bumper area and the Toyota badge itself.

There are also black mouldings for the doors and 19-inch alloy wheels with a contrast black and machined metal finish. A new under-bumper trim piece and specific GR Sport badges feature at the rear of the car. All cars get a bi-tone exterior paint scheme too, while there’s the option of eight colours to choose from.

Inside, the GR Sport car boasts the choice of either an Alcantara-trimmed leather or all-fabric seat upholstery, with either one incorporating contrast red and grey stitching. There’s also a perforated leather finish applied to the steering wheel and shift lever gaiter.

Underneath, the C-HR uses front and rear springs which have been stiffened by 10 and 15 per cent respectively, while the shock absorbers are newly-tuned to give increased damping force.

Cars utilising a 1.8-litre hybrid setup also receive the large-diameter anti-roll bar which is usually found on the 2.0-litre hybrid model. The steering setup has also been tuned to give better feedback.

Prices for the C-HR GR Sport – with either a 1.8-litre or 2.0-litre engine – are due to be announced closer to the car going on sale early next year.