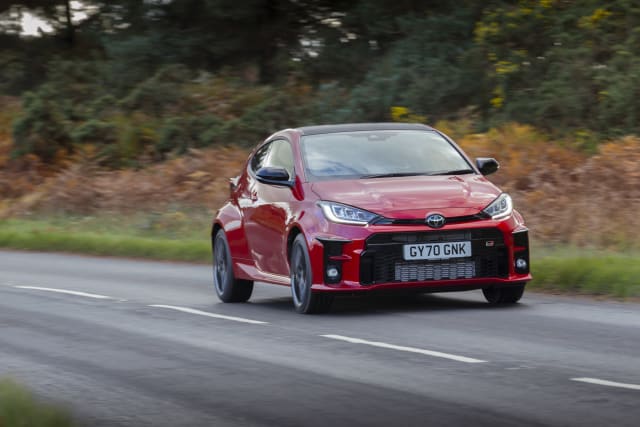 The hot hatch segment is in blindingly rude health at the moment. We’ve got an impressive cross-section of options from a variety of different manufacturers. There’s Merc’s powerhouse A45S, Hyundai’s enthusiast-pleasing i30N and, of course, the ever-present Golf GTI. Now Toyota wants a slice of the action.

You see, it’s been developing its GR – or Gazoo Racing – section of cars, with the Supra being the most recent addition. Now, the rally-based team has turned its attention to one of Toyota’s smallest and best-known hatchbacks to create this – the GR Yaris. With all-wheel-drive and plenty of driver-focused tech, it looks set to punch well above its weight, but can it? Let’s find out.

Don’t go thinking that this is just a regular Yaris with a punchier engine lumped under the bonnet. No, there’s a lot more going on here than that. Since the GR Yaris has been designed to homologate the next-generation Yaris rally car, it sits on a brand new platform while the overall construction, aerodynamics and permanent all-wheel-drive system are all box-fresh too. A certain Tommi Makinen has had his hand in the development of the GR Yaris, proving just how serious this car is designed to be.

The roofline is far more heavily raked than the standard Yaris, while the engine has been placed further back in the car for better weight distribution. And speaking of weight, the GR tips the scales at just 1,280kg – considerably lighter than rivals.

Sitting underneath the bonnet of the GR Yaris is a 1.6-litre turbocharged petrol engine with 257bhp and 360Nm of torque. Driven through a six-speed manual gearbox to all four wheels, it’s good to power the Yaris from 0-60mph in 5.5 seconds and onwards to a top speed of 143mph. Fuel economy sits at 34.3, while CO2 emissions stand at 186g/km.

The proof of the pudding is in the eating, as they say, or, in this case, the driving.

So what’s this little Yaris like then? In terms of outright driving excitement, it’s right up there. The whole car feels impressively ‘alive’, with a ride which is perfectly suited to the UK’s roads. It’s firm, make no mistake about it, but it manages to take the edge off bumps and imperfections in the surface impeccably well. Driven at a decent speed, this car monsters undulating roads. The traction governed by the all-wheel-drive system is immense too, as the limited-slip differentials combine to practically drag the car kicking and screaming through the bends.

Then there are the driver interaction areas. The steering is well-weighted and direct, while the gearbox is one of the standout parts of the whole show. It’s pleasingly mechanical and a refreshing change from other overly-light ‘boxes you’ll find in rival offerings.

The engine? It’s torquey and brawny and screams away towards the redline. The sound it makes isn’t what we’d call ‘tuneful’, but it certainly has a rally-inspired edge to it, while all manner of turbo whistles and chirps help to keep things interesting at all speeds.

The GR Yaris really does look like a compact rally car which has just happened to find itself on a stretch of UK road. It’s super-wide, though its compact length gives it a punchy, aggressive appearance.

The roof has been heavily raked too, while the three-door layout (as opposed to the standard Yaris’ five) really does help to give a more coupe-like look. It’s a design which will find favour with many, we’re sure.

Around the back, there’s an exhaust system with twin outlets housed within a large diffuser. Everywhere you look, there are performance-based touches which really do help to differentiate this car from the standard Yaris.

The interior of the GR Yaris might not rival more premium offerings when it comes to outwardly high-end materials, but it does the best to deliver a driver-focused experience which feels both well-made and ergonomically sound. The plastics used across the cabin aren’t the best and while the infotainment screen might not be the sharpest nor the easiest to use, it does include Apple CarPlay and Android Auto so you can easily mirror your phone’s display.

The large bucket seats have a good amount of support while there’s plenty of adjustment for the wheel, too. The gearstick is perfectly placed for neat changes, while the pedal spacing is bang-on too. In short, all of the aspects of the cabin which relate to how the driver interacts with the car have been well-judged and successfully implemented.

When it comes to outright practicality, however, the GR Yaris isn’t the best. That heavily raked roofline has resulted in a marked decrease in the amount of headroom. Average-sized adults will find it difficult to sit in the back – it’s far better suited for use by kids. There’s also just 174 litres of space in the boot on offer, too.

Prices for the GR Yaris start from £29,995. You’ll have to pay £33,495 for the Track Pack-equipped model, mind you, but given the mechanical edge it gives it seems more than worth the additional expense. It’s a lot of money for a car of this size, of course, but when you take into account the sheer amount of development and mechanical expertise that has gone into the Yaris, then the outright cost makes far more sense.

Finance options are particularly competitive for the GR Yaris. Monthly payments can be brought as low as £299 for a Track Pack car over 24 months, with an initial deposit of £7,988 and a fixed mileage of 8,000 miles per year.

However, all cars get all-wheel-drive as standard as well as sports suspension, 18-inch wheels and ultrasuede sports seats.

Toyota could have quite easily just transplanted a larger engine into its Yaris, stiffened the standard suspension and fitted some go-faster stripes to create the GR. However, the mechanical and development lengths it has gone to in order to ensure that it’s the real deal should be applauded.

It might be expensive, but the GR Yaris is as accomplished a hot hatch as we’ve seen in a long time. For someone who wants a piece of motorsport-grade performance for the road, the GR Yaris is hard to beat.