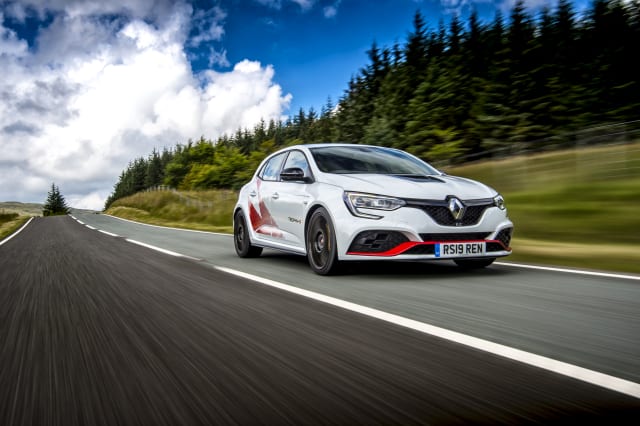 Renault has a rich and varied history of creating unsurpassable hot hatches. There was the 5 Turbo, the Clio Renaultsport and even the dinky Twingo Renaultsport. All have shared a similar verve for cornering, as well as an ability to transform even the most humdrum of trips out into special occasions.

Which brings us to this – the Renault Megane R.S. Trophy-R. Arguably the hardest and most serious version of the current-generation Megane, it aims to eclipse the accomplishments of its elders and show that modern R.S. models can keep up with the best of them. Let’s find out if it can.

There’s a lot to talk about here, mostly around how much is, well, lacking. You see the standard Megane R.S. has been stripped to create this Trophy-R version, which means that it hasn’t got any back seats, nor the standard car’s headline-catching four-wheel-steering system. There’s a carbon composite bonnet, huge fixed bucket seats and an ultra-light Akrapovic exhaust.

But the crash diet doesn’t stop there. The rear wiper and motor have ended up in the skip too, while even the carpet is thinner – and the glass on the side windows is thinner too. In total, the Trophy-R tips the scales at 1,306kg – some 130kg less than the standard Megane R.S. That’s a considerable saving and does go to show how serious Renault is about making this car go faster.

But when it comes to the engine, things remain largely unchanged. You get the same 1.8-litre turbocharged petrol engine as you do in the standard Megane R.S., and while its 5.1-second 0-60mph sprint time might be quick enough, it’s not exactly blistering. There’s only the option to have a six-speed manual ‘box on the Trophy-R too – you’ll find no gearshift paddles here – while a combined fuel consumption figure of 35.8mpg is verging on impressive for a car of this type.

Flat-out it’ll do 165mph. But the bare performance figures for the Trophy-R don’t flatter it; this is a car which is far more than numbers would lead you to believe. But we’ll get on to that shortly…

A car doesn’t set a Nurburgring production front-wheel-drive car record with brute force alone and that’s immediately noticeable with the Trophy-R. It’s quick – but not neck-snappingly so – but the real merits in this car lie with the way it rides and turns. Ohlins dampers on all four corners give the car a prestigious ride at higher speeds – particularly over the UK’s broken asphalt – which allows you to dial in to just how well this car handles. The lightness is noticeable through the bends, where the Trophy-R breathes in, hooks up and practically fires through any twist in tarmac.

In the dry, the level of grip is sensational. But even in the wet, the Trophy-R does an excellent job of tacking itself to the surface. With a six-speed gearbox to hand – certainly not the most accurate in the segment but enjoyable to use nonetheless – you have a freedom to properly engage with the car, something which is lost on many automatic rivals.

With its garish decals and huge boxy arches, the Trophy-R’s design is definitely a case of love it or hate it. We lie in the former camp, having found the car’s rather outlandish design to be a breath of fresh air against even the wildest rival hot hatches. It even makes the be-winged Honda Civic Type R look understated.

The headlights of the current-generation Megane look particularly sharp, while the lights at the rear have a definite ‘signature’ to them; if you ever see a Megane at night, it’s likely that the look of the lights will stand out against any other cars on the road.

The cabin of the Trophy-R is certainly focused around the process of driving and lightness, but that’s not to say that it feels overtly sparse. The materials used up front are a little on the harsh side, but there’s plenty of Alcantara used to hammer the ‘racing’ feel home.

The lack of rear seats can either be seen as a massive plus or a rather large negative. For carrying luggage the Megane is excellent; the ‘boot’, now open and easily accessible, is huge and can swallow up plenty of items.

However, if you did want to use your Trophy R every day – and we’re sure many drivers would want to – then the lack of rear seats might become a chore. That said, a car like this wears its restrictions on its sleeve, so if you’re planning on opting for a Trophy R then there’s a good chance that you’re already aware of the trade-offs it brings.

Though it might have been heavily stripped of any real additions, the interior of the Trophy-R features much of the extras that you’d want to keep daily driving bearable. Air conditioning remains fitted – though many ‘hardcore’ cars often remove this as a first port of call – while though the seven-inch infotainment system is smaller than the 8.7-inch unit you’d usually find in the Megane – again, to save weight – it’s good to use and features Apple CarPlay, so you can seamlessly connect your smartphone.

There’s even cruise control, which certainly does take some of the backache out of longer journeys.

Well, Renault has done it again. The Trophy-R is what proper hot hatches should be; engaging, exciting and bristling with personality. Though the car’s engine might not shine through as a key part of the car’s overall appeal, it’s more than made up for by the Megane’s sparkling dynamics which really do shine in the UK.

Yes, it’s an expensive proposition given its more-than-£50,000 starting price, but seeing as it feels like the pinnacle of the current-generation of Megane, it’s a worthwhile cost to accompany it.