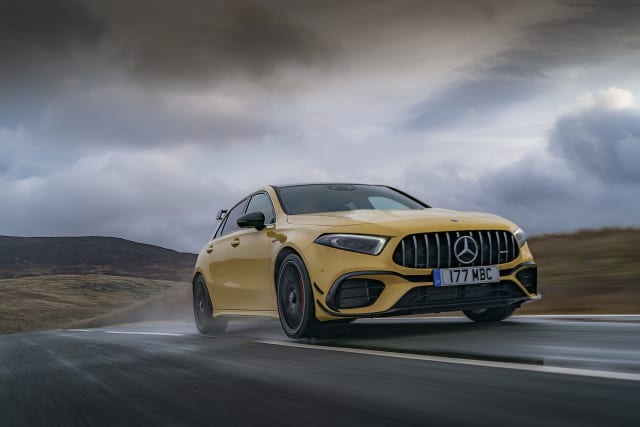 Britons love a hot hatch. For decades, we’ve been one of the dominant markets for performance hatchbacks, with the combination of practicality and pace appealing to buyers.

The current crop has frankly astonishing performance, and technological advances mean many of these cars have become all-wheel-drive to help get their power down onto the road.

One of the best-sellers is the Volkswagen Golf R, which has just been updated for the eighth-generation version of the popular hatchback. With this in mind, let’s take a look at this new version as well as some of its rivals.

Volkswagen hit a home run with the Golf R, because not only did it bestow subtly sporty styling on this hot hatch, it offered impressive performance, all-wheel-drive security, and most importantly, an enticing finance package.

The new model is here and follows a similar recipe, except this time it has more power: 316bhp, to be precise. What’s more, it has new drive modes, with the most interesting being Drift mode, which turns off traction control and feeds all of the power to the rear wheels.

You probably don’t have to go back very far before the idea of a near-400bhp hot hatch would be laughable. However, the latest Audi RS3 has reached this point, and with a characterful engine, too. The 2.5-litre five-cylinder is much-loved for its boosty nature and appealing rumble.

The downsides? It’s not cheap. For that Audi badge appeal and ballistic performance, you’ll have to spend more than £46,000.

Not long ago, BMW earned many fans for building some of the best-driving cars around. However, in the past decade it has moved away from its classic ‘ultimate driving machine’ slogan to build premium and comfortable cars, but they have proven to lack excitement.

Recently it has found some of that driving enjoyment again, with the latest M135i a great example. It’s not hugely powerful with 302bhp, but it handles well and brings back some of the fun that’s been missing from BMW’s line-up.

The Audi isn’t the only car that feels closer to a rally car than a road-going hot hatch. The Mercedes-AMG A45 S is arguably even crazier. It has 415bhp and all-wheel-drive, but the way it deploys that power is frantic.

While its predecessor had a similar recipe, the latest model combines that prodigious performance with a genuinely fun driving experience. Like the RS3 it’s rather expensive, starting at just under £50k, but if you’ve got the money it’s hard to argue it’s not worth it for the sheer lunacy of owning a hatchback with such performance on tap.

Under the skin the Mini Clubman JCW is very similar to the BMW M135i. However, it has its own character that makes it different enough to consider. The Clubman’s shape is pretty unique, offering estate-like styling with the side-hinged rear door in a car the size of a typical hatchback.

It feels heavier and slightly less engaging to drive quickly, though. So this model is worth considering if character and charm are more important to you than outright driving engagement.