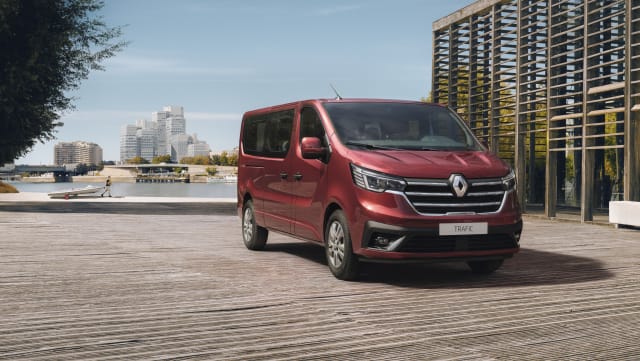 Renault has revealed the passenger-carrying versions of the latest Trafic van, which gets new styling and an updated cabin.

The Passenger and SpaceClass variants are aimed at large families or businesses that carry a lot of people. The former has space for nine, while the latter has increased specification and comfort, with seating for eight.

Both models take on the styling of the latest Trafic van, which gets a wider front grille, new front bumper and full LED headlights. Other improvements include 17-inch alloy wheels for the SpaceClass and redesigned wheel trims for the Passenger, while the Carmin Red paint job pictured here is new.

Inside, Renault has improved the cabin to give a more premium feel by borrowing design and material elements from the firm’s road cars. The design now has a wraparound look that’s supposed to feel more spacious, while there’s also a new gear lever and chrome trim for the air conditioning dials.

There’s a new 8.0-inch infotainment screen with Apple CarPlay and Android Auto, standard satellite navigation and an optional wireless charger. Additional storage has been added to the cabin bringing it to a total of 84 litres, while rear storage totals 1,800 litres.

A luxurious Prestige Pack is available to companies doing VIP passenger transport, which adds a swivelling captain;s chair, a bench seat replacing the third row of seats, a reading light and leather upholstery throughout.

Both models will be available in early 2021, with full pricing specification revealed closer to the time.