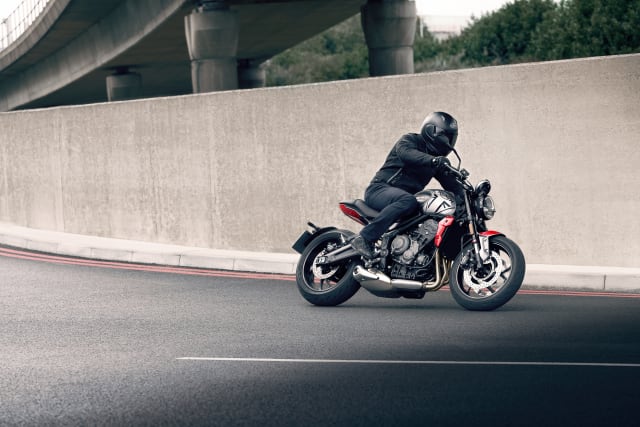 Triumph’s new Trident has broken cover for the first time in full.

It’s also available with an A2-compliance kit which will allow it to be ridden by those holding an A2 licence. It restricts the amount of power the engine can produce, and dealers are able to de-restrict the bike back to its full output when the rider passes their full licence test.

An A2 licence allows those aged 19 or over to ride a motorcycle with up to 47bhp without L-plates.

A six-speed gearbox sends power to the wheel, while an up-and-down quickshifter is available as an optional extra, allowing the rider to upshift and downshift without having to engage the clutch.

Weighing in at just 189kg wet, the Trident uses a tubular steel chassis with an ergonomic design which has been designed to ‘suit both experienced and new riders’, according to Triumph. It also features 17-inch aluminium wheels and aluminium bars.

The seat itself has been created with both rider and passenger in mind, with a deep foam construction providing a comfortable seating platform. Passenger grab handles can be added as an optional extra, too.

All Trident models use Showa suspension, with an upside down 120mm setup at the front and a monoshock unit at the rear. Cornering performance is further boosted by the standard fitment of Michelin Road 5 tyres too, while a tyre pressure monitoring system is available as an option.

When it comes to braking, the Trident makes use of two-piston Nissin front calipers with 310mm discs, while a single piston caliper features at the rear.

A large TFT screen displays key information to the rider, while an accessory module can allow the rider to control features such as navigation, GoPro cameras and even phones via handlebar-mounted switches.

All bikes receive a full LED lighting system with Triumph’s badge incorporated into it, while the indicators are LED units too.