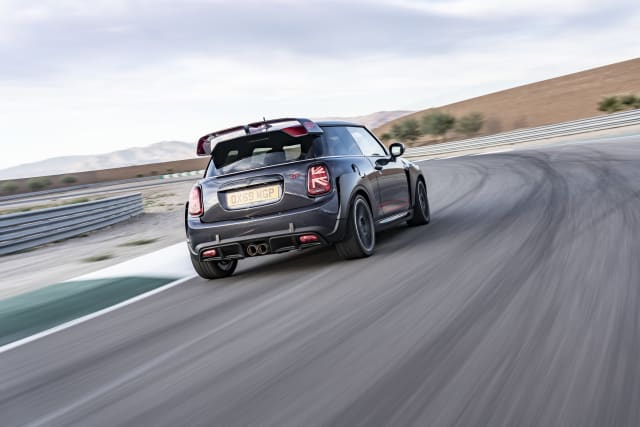 BMW earned a reputation back in the day for building some of the best drivers’ cars around, with even its mainstream models known for being brilliant to drive.

In recent years, that crown isn’t quite so secure. BMWs are still generally great to drive, but they’ve lost a bit of that sparkle that makes them stand out from the crowd. That said, the firm’s M division still works wonders on performance versions of the firm’s more typical cars, while BMW-owned Mini has long had a reputation for its ‘go-kart-like’ driving style.

So, when BMW gave us the opportunity to drive the hardcore BMW M2 CS and Mini John Cooper Works GP on a short test track to really find their limits, we jumped at the chance. They’re very different propositions, but here’s how they compare.

Firstly, we were given the keys to the M2. This is the CS, which forms the basis for the firm’s entry-level motorsport model, and sits above the already intense M2 Competition. It has a 3.0-litre six-cylinder engine making 444bhp and 550Nm of torque.

It’s lighter than the Competition too, thanks to carbon-fibre parts such as the bonnet, which is 50 per cent lighter here. This helps the car lap faster and handle better.

And it’s immediately apparent that these upgrades have had a profound effect on the M2. We launch off the line and the sub-four-second 0-60mph pushes us back into the seat. A fast chicane quickly approaches, so our instructor tells us to brake hard before lifting off gently to get the car turned in.

First left, then right, and the car has no complaints about the quick change of direction. There’s a slight left followed by a double apex right that takes you onto the straight. This involves hard braking at the start, then mashing the throttle on exit while still holding some steering lock.

The grip is incredible. There had been light drizzle in the morning and the air was cool, but the tyres bite into the Tarmac and launch you out of corners with comedic efficiency. What’s perhaps most impressive is how little roll there is – you just chuck the car into a corner and it pivots around its centre.

Its basis as a race car is clear. It’s hard, it’s focused, and it rewards commitment. In our short time with the car it’s obvious there’s so much more pace to be found… if only we were brave enough.

Get into the Mini and it’s just as serious as the M2, but also completely different. While you fall into the BMW, the Mini feels a lot more upright, You sit higher, and the blockier design is almost van-like following the sleek coupe.

This would be one seriously impractical van, though. It has no rear seats, but in their place is a massive brace to make the car stiffer. On the outside it has one of the most incredible body kits ever fitted to a production road car, and that rear wing is hilariously big.

All show and no go? Far from it. Under the bonnet sits a 2.0-litre four-cylinder engine making 302bhp and 450Nm of torque. That’s not crazy horsepower, but the way it’s pummeled into the road through the front wheels feels like both numbers should be rounded up to the next 100.

It’s far less composed than the M2, but in this way it’s also more fun. For the average driver who isn’t chasing lap times, it’s easy to see how you’d get more enjoyment from this fizzing bundle of silliness than the serious, composed M2.

On the brakes into that first chicane, with all the weight over the front wheels and turning left, the rear goes light. Lift-off oversteer is a regular feature of driving this car, while its aggressive power delivery and stiff suspension encourage you to drive like a hooligan. The security of front-wheel-drive provides the confidence to push on despite it being a handful.

I can understand why some don’t like it. It’s totally uncompromising, and feels like a bit too much for the road. Yet that’s what makes it so fun, while also being capable on the track.

Both cars are impressive feats of engineering and, at the hands of a good driver could probably embarrass cars twice the price on track. Their characters are totally different though – the seriously composed BMW and the hooligan Mini.