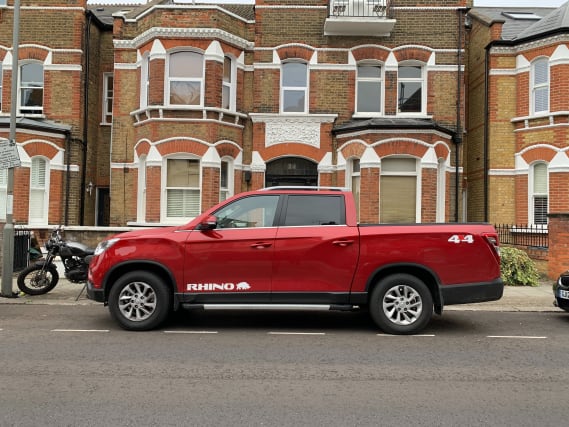 As much as I loved the idea of living with a pick-up, I honestly thought it was going to be horrific on a day-to-day basis.

I reckoned it would be awkward to park, outrageously thirsty and just pretty impractical. But no, it’s been the exact opposite and a brilliant thing to live with so far – not least on the rural roads of North Yorkshire, which are getting increasingly mud-ridden by the hour.

But while it’s ideal for around these parts of the world, I wasn’t quite sure how it would cope on its first real challenge – the perils of Central London.

But given London is somewhere that’s nightmare-inducing at the best of times to drive around, not least in the Musso, which at 5.4m-long is 40cm longer than a Range Rover.

This was pre-Tier 2 restrictions being introduced in the capital while visiting a friend, and keen to avoid public transport, I reckoned that even something as big as the SsangYong would be better than public transport.

The first challenge? Parking. I’m pretty keen to avoid a tight multi-storey car park at the best of times, not least when you’re driving something the same size as a tank, so instead resorted to a website that allows you to search for alternatives to park up your car, including the option I resorted to – using someone’s driveway.

Through the site, it says what size vehicles they are appropriate for, such as ‘suitable for a 4×4, estate’. Trouble is, when someone says ‘4×4’, you’re never sure if they’re meaning a Qashqai or a Range Rover. I guess we’d find out.

Once entering the hustle and bustle of London, which must have the most impatient drivers per capita of anywhere on the planet and scooters bombarding you from every angle, I soon realised the Musso is a surprisingly accomplished city car. Daft, I know.

With all-round sensors, great visibility and light steering (almost ridiculously so for something this size), you realise it’s really no more difficult to drive in these areas than an average hatchback. Sure, it’s not particularly useful down narrow streets, but given in the parts of Battersea where I and how it seems that people can’t function without a 4×4, it blends in pretty well and doesn’t feel or look out of place.

So, what about parking? Well, it certainly wasn’t as easy as I was hoping, with the tight driveway for some probably insanely large house being nestled on a tight one-way street with cars parked at both sides. And while the Musso is pretty good at disguising its size when you’re moving, it’s not in scenarios like this.

I’m happy to admit I’m not the best of parkers at the best of times (I know, someone admitting they can’t park – madness), so let’s say it was a challenge at the least to be able to swing the Musso around without knocking either a parked car or some unfortunate person’s wall, and then swinging into a tight space on the driveway.

It’s important to know that even had I been in a Golf, I reckon it would have still been a struggle, but thankfully all corners of the Musso remain damage-free, and the bricks and mortar remain structurally sound.

The only other aspect that troubled the Musso was the prospect of a width restrictor, which I decided to just avoid in the first place after realising the truck’s only a few centimetres narrower than the restrictor, which features a huge kerb at either side and could nicely trash the alloys in an instant.

So, parking troubles aside, the Musso’s managed to add another string to its bow, and a really quite surprising one at that.