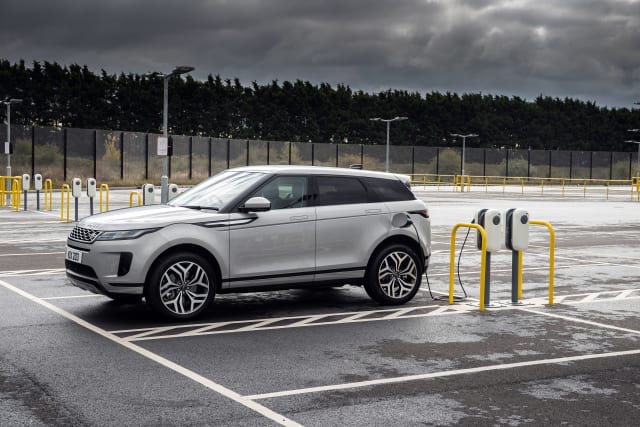 Given Land Rover’s history of building utilitarian off-roaders, it raised a few eyebrows when it introduced the urban-focused Evoque back in 2011 to capitalise on the booming sales of premium SUVs.

Now, it’s one of the brand’s most popular models, driven in part by strong fleet sales. It’s taken a while, but Land Rover is now tapping into that market even further with a new plug-in hybrid version that will be mighty appealing with its low benefit-in-kind figures.

Because this is simply a new powertrain being added to the Evoque’s line-up, there’s not a lot outside of that which is new. We’ll get into more detail shortly, but the engine and motor combination is a new one that’s not been used before.

The latest Evoque was first revealed back in November 2018, and was designed with electrification in mind from the start. It was a whole new vehicle architecture built with enhancing comfort and refinement, while also getting new infotainment software.

Anyway, the big news is the powertrain, which uses a 1.5-litre petrol engine and an electric motor. They combine to produce 305bhp and 540Nm of torque, but most importantly, the 15kWh battery provides 34 miles of electric range.

The benefit of this is that if you keep the car topped up with charge, the Evoque will be capable of completing the average commute without touching any petrol. It also contributes to that super-low CO2 emission figure of 32 – 38g/km, which, in turn, makes its benefit-in-kind repayments low.

Over the years, the Evoque has established itself as providing a fantastic ‘mini Range Rover’ experience, with the size and security of an SUV coupled with bundles of badge appeal. That’s still the case in the P300e, which in many ways elevates this premium experience thanks to its quiet and refined electric driving experience.

It encourages a more sedate driving style, but if you do push on and kick the engine into life you’ll find it’s relatively quiet and grumble-free. The driving position feels more like you’re inside the car, rather than sat up high like in other SUVs. It means you feel secure while also aiding a limited sensation of roll in corners.

The Evoque’s trump card has always been style, managing to meld premium appeal with rugged Land Rover looks befitting its impressive off-road capabilities. The coupe-SUV look has made its way to many brands’ ranges, but the Evoque has long been a model that has combined the raised 4×4 look with a sleek, sloping roofline.

Despite this, its rugged presence comes in the form of chunky wheelarches and large alloy wheels, as well as prominent underbody protection visible front and rear. This latest generation has a more modern front end, too, thanks largely to the slim LED headlights.

Climb aboard the Evoque and it’s clear Land Rover spent a long time making the cabin a modern and design-led space. Volvo has been a class-leader in this department thanks to its minimalist designs, but this Range Rover isn’t far behind thanks to its light and airy atmosphere and clutter-free design.

This is because it uses the firm’s latest twin-screen infotainment system. Unlike other manufacturers, which have struggled to integrate regularly used systems into quick, intuitive touchscreen menus, the Evoque’s lower screen has dials that can control climate and other functions depending which menu you’re in. It’s the perfect compromise between classic, simple-to-use buttons and clean, modern touchscreens.

Prices start at £44,650, and with this being a premium SUV, there’s plenty of equipment on-board. Inside, creature comforts include a digital rear-view mirror, surround camera system, heated steering wheel, and a Meridian sound system.

There’s also a 12-inch screen in the instrument binnacle, and the aforementioned infotainment system, which gets Apple CarPlay and Android Auto integration, while on the outside, you get LED headlights. Other key features include keyless entry, Terrain Response, adaptive speed limiter, and various safety systems.

The Evoque has long been one of the jewels of the Land Rover line-up thanks to the fact it appeals to urban motorists while staying true to the brand’s 4×4 roots. That’s continued with the introduction of this plug-in hybrid, with no compromises made for electrification.

If you’re a company car buyer, the low benefit-in-kind will make this SUV hugely appealing, and it could be less expensive in the long run than options from the segment below. If you have the ability to charge at home and the Evoque P300e is within budget, adding it to your shopping list should be a no-brainer.