First Drive: Do the BMW 4-Series’ driving dynamics make up for that controversial front grille? 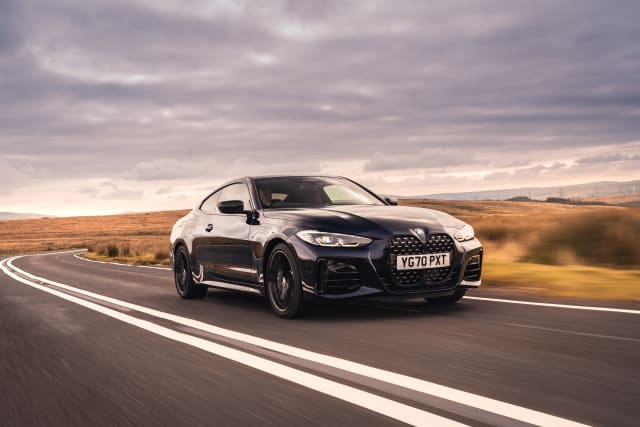 This is arguably one of the most controversial cars to be released this year. And the reason is that grille. BMW has been increasing the size of the grilles on its cars for years now, and it has culminated with the large nostrils you see here. Car enthusiasts seem offended by them, for some reason.

Look past the nose, though, and it’s the same old enticing BMW coupe package. We have a sleek body shape, premium cabin quality and a combination of performance- and economy-focused engines. We took to the roads of Oxfordshire to see how it handles.

The new 4 Series is longer, wider and slightly taller than the old one so it should be more composed on the road while also being more practical – boot space has increased to 440 litres, for example.

There are new engines, too, with mild-hybrid technology fitted to all diesel engines and the straight-six petrol in the range-topping M440i. Finally, it debuts a new M Sport Pro Package, which brings some sporty styling and dynamic upgrades.

There are a variety of petrol and diesel engines available, but we got to test two ends of the spectrum – the entry-level diesel, badged 420d, and the range-topping petrol, M440i.

Firstly the diesel, and although new car buyers are shunning this fuel it’s a real shame. Even this 420d model is surprisingly punchy, because despite only having 187bhp it has a healthy 400Nm of torque. With fuel economy hovering around 70mpg in the official figures, it makes for a compelling option. Adding all-wheel-drive drops it to about 60mpg and isn’t as fun to drive, though.

The M440i blows it out of the water for excitement. The straight-six engine makes 369bhp and 500Nm of torque and can go from 0-60mph in under 4.5 seconds. With its mild-hybrid technology, the fuel economy isn’t too bad either, measuring around 40mpg.

BMW made its reputation building cars for driving enthusiasts. And while it hasn’t exactly been class-leading in this department for a few years now, it’s always been competitive – and that continues with the 4 Series.

The M440i feels perfectly positioned between the rest of the range and the full-fat M4 super-coupe that’s coming soon. It’s fast and sounds great but doesn’t have eye-watering running costs. It’s let down slightly by artificial-feeling steering, but generally speaking it’s a great handling coupe that settles into daily driving duties well.

The M440i is only available with xDrive, BMW’s all-wheel-drive system. It provides fantastic grip but does rob it of some fun on a twistier road. The 420d we tested came with rear-wheel-drive, and it was a reminder how good BMW is when it’s building a simple front-engined, rear-driven car. Even this entry-level model had fantastic balance.

Despite the jokes on social media, the 4 Series is not an ugly car. Yes, the grille takes some getting used to, but in the metal it’s less obnoxious than it appears in photos. It’s quite an aggressive, blocky front end design that seems a little at odds with the car’s sleek silhouette, though.

Things are much less controversial at the rear. The roof tapers down into the boot, which wears a subtle lip spoiler in M440i guise and sits between chunky wheel arches. The tail lights are slim towards the centre of the car before growing at the edges, helping to emphasise the car’s width.

Inside it’s typically BMW, with clean surfaces, few physical buttons and a driver-focused design. That said, there’s a great compromise between traditional and modern styles, because the key climate controls are still buttons that can be quickly accessed on the dashboard, while everything else is relegated to touchscreen menus.

What immediately hits you is that the driving position is fantastically adjustable, meaning even us long-limbed drivers are well catered-for. The next thing you notice is the impressive levels of build quality and materials on show. It’s a premium product for sure.

The M440i sits alone as its own trim level, with prices starting at £54,645. Standard equipment includes a sporty body kit, a ‘sprint’ function that improves performance, red brake callipers, and a sports differential.

Controversial styling or not, BMW is onto a winner with the new 4 Series. It’s great to drive even if you go for entry-level models, and offers plenty of choice for those who want performance or economy. It’s well-specified inside and feels like great quality, too.

It’s not perfect, with the artificial steering taking some getting used to in particular, while what the all-wheel-drive system adds in grip it takes away in driver engagement. Overall, though, this is a great, sporty coupe.