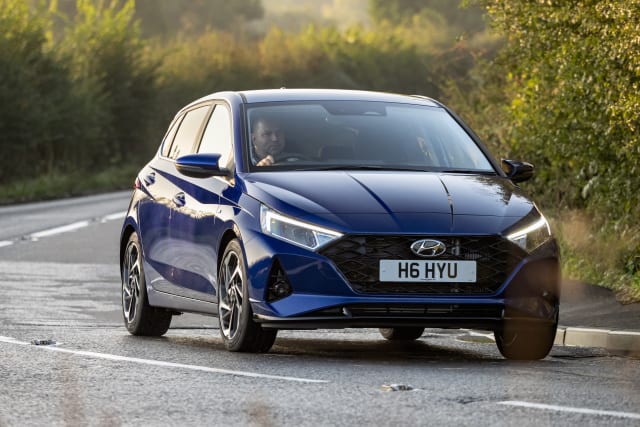 You could say that Hyundai has been on somewhat of a roll lately. Across its wide-sweeping range of cars, it’s a company delivering genuinely competitive vehicles at eye-catching prices. It’s handy, too, that they handle well and err on the side of driver enjoyment, regardless of which model you opt for.

It’s currently in the process of revising its line-up to ensure it remains competitive, which brings us to this – the new i20. It’s no mid-life facelift this, either; Hyundai’s latest second-smallest model now sits on a completely new platform which aims to bring more space and practicality. Does it do this as well as maintaining that all-important value for money Hyundai is well known for? We’ve been behind the wheel to find out.

As mentioned previously, the new i20 sits on a brand new platform which means it’s now wider and longer than the car it replaces, as well as quite radically different in the styling department too. Hyundai – in what is now a common move across the wider industry – has also incorporated 48-volt mild-hybrid assistance into the car’s powertrain, bringing better fuel economy and lower emissions – something all manufacturers have a close eye on currently as more stringent targets come into force.

Whether you go for entry-level SE Connect or all-singing-all-dancing Ultimate trim, there’s just one engine to go for, and it’s a 1.0-litre turbocharged unit with 98bhp and 172Nm of torque. There’s the option of a six-speed manual ‘box, or a seven-speed dual-clutch automatic on offer, with economy and emissions being only marginally affected by selecting the latter.

Our test car came with the former, however, and in Premium spec it’ll return a claimed 54.3mpg while emitting 118g/km CO2. The introduction of a mild-hybrid system, Hyundai says, has resulted in a three to four per cent reduction in both fuel consumption and emissions, too.

The i20 also features clever fuel-saving technology which allows it to coast with the engine off when the driver releases the accelerator, only kicking back into life when they return to the throttle or clutch.

Sitting in the front seat of the i20 you’re met with a seating position which feels unusually driver-focused for this segment. There’s a good level of adjustability to the wheel and seat, and the chair – in its lowest setting, as is our preference – allows you to feel properly ‘in’ the car rather than ‘over’ it. So things are off to a good start.

Push off and the little 1.0-litre engine thrums away merrily and without too much intrusion into the otherwise quiet cabin, while the light gearbox and clutch pedal make the i20 well-suited to dealing with stop-start traffic. The steering too is generously weighted, with just enough heft to it to give confidence in the bends.

Our car, on 17-inch alloys which come on Premium-grade cars, did feel a touch crashy over uneven surfaces, while potholes unsettled it. We’d opt for the smaller 16-inch wheels if you’re after the best ride possible.

Whereas the old i20 looked – in truth – a little plain, this new model has arrived with a genuinely striking exterior design. It’s all cuts and angles, giving a relatively small car quite a lot of presence out on the road. Our car, in metallic blue, looked particularly striking.

At the rear is where the i20’s looks are the most impressive, with sharp LED lights combining with a diffuser-style trim piece to give the car a really sporty appearance. Of course, looks are down to the individual, but to our eyes, this is one successful design.

Hyundai has been making steady headway when it comes to the quality of its interiors and the i20’s is a real showcase of this effort. Yes, there are some harder plastics to be found here and there, but the general fit-and-finish of the cabin is excellent. There’s space, too, with the amount of legroom for those sitting in the back far exceeding what you’d expect from a car in this segment.

Though the i20’s starting price has increased considerably – up to £18,595 from the older car’s £16,600 – Hyundai says that, in its experience, buyers are looking past the older entry-level models in favour of high-equipment specifications. In response, it has cut out the older ‘S’ trim, kicking things off with SE Connect.

But here you’re getting a wealth of standard equipment, with features such as 16-inch alloy wheels, an eight-inch touch screen and Apple CarPlay and Android Auto included. Plus, all cars – regardless of trim – get a 10.25-inch virtual display where the conventional dials would be. It’s a real draw in terms of premium equipment.

Our car, in Premium spec, built on this with a larger 10.25-inch infotainment screen, beefier alloy wheels and Hyundai’s Bluelink smartphone service, among other features. It still chimes in at a respectable £20,795.

Hyundai has been hard-pressed to continue its form in creating cars which both deliver in terms of standard equipment and value, but still remain good to drive and efficient. With the new i20, it appears to have hit the nail on the head, bringing a wealth of standard tech and a new, more fuel-sipping engine than before. It also looks striking in the metal and features packaging which could make it a genuinely appealing prospect to family owners, or those who want a quirky, good-looking car which won’t break the bank to buy or run.

When you also factor in Hyundai’s competitive five-year warranty, it’s clear that the i20 doesn’t leave many boxes unticked.