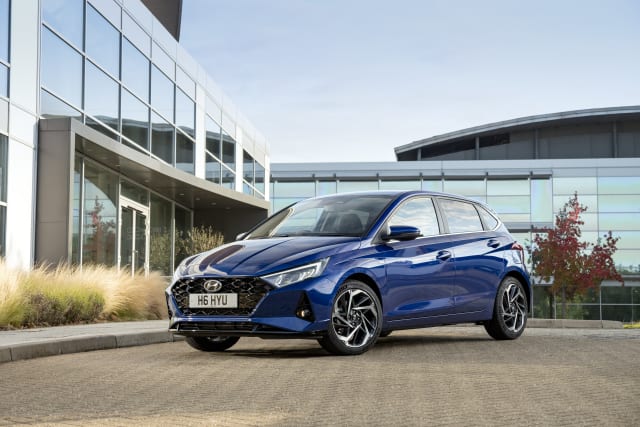 Hyundai has confirmed that the new i20 will cost from £18,595 and boast a new top-level trim called Ultimate.

The popular supermini’s new generation will be the first car to use Hyundai’s new ‘Sensuous Sportiness’ design language, as well as introducing a new mild-hybrid powertrain.

Following a similar tactic to the i10, which saw its range updated earlier this year, the new i20 gets a simplified trim line-up. Hyundai says each trim is now better specified than before, making residual values almost five per cent better over three years than the model it replaces.

The entry-level trim is SE Connect, which gets 16-inch alloy wheels and LED daytime running lights for the exterior, while inside there’s an eight-inch touchscreen display with Apple CarPlay and Android Auto, air conditioning, cruise control, a leather-wrapped steering wheel and gear lever, and rear parking sensors with a reversing camera.

The top trim, called Ultimate, starts at £22,095 and gets a two-tone roof as standard, keyless entry, wireless smartphone charging pad, and a Bose sound system.

Ashley Andrew, managing director of Hyundai Motor UK said: “All new i20 has already received positive reviews for both its styling and dynamics and we can now reveal that it follows the lead set by the all new i10 earlier this year with an improved level of specification which focuses on exceeding customer expectations in this segment.

“The efficient 48V hybrid powertrain will deliver a strong balance between economy and performance, whilst drivers more focused on sportier handling and performance won’t have to wait too long until the i20 N Line and i20N join the range.”

Alongside this pricing, Hyundai also revealed the performance focused i20 N. This mini hot hatch gets styling touches inspired by the firm’s rally cars, and gets a new 1.6-litre petrol engine making 201bhp and 275Nm of torque. Pricing for this model will be confirmed at a later date.