UK Drive: Is the Volvo V60 Cross Country a compelling alternative to an SUV? 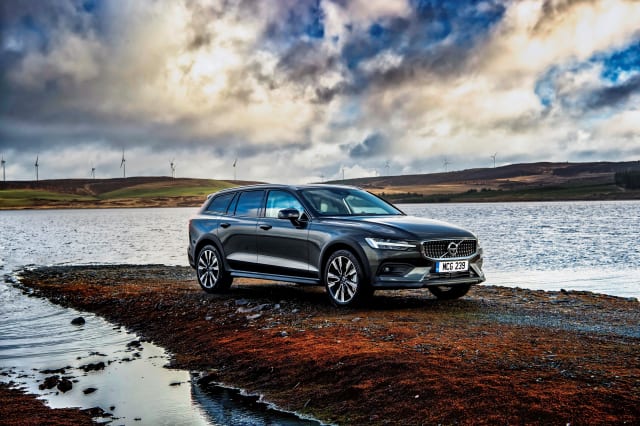 You might know Volvo as an SUV maker with days, with its range of ‘XC’ models proving impressively popular. But before these came along, this Scandinavian manufacturer was known for its estate cars, which have historically been big, solid and safe.

And buyers were also able to choose these models in 4×4 ‘Cross Country’ form – bringing rugged looks and additional extra off-roading ability.  Despite the obvious rise of SUVs, Volvo continues to offer these off-roady estate cars, with ‘Cross Country’ variants of both the V60 and V90 available.

Here we’re trying the smaller V60 to see if it’s worth considering over a traditional SUV?

With just about all standard V60 models being front-wheel-drive, the Cross Country is at an immediate advantage by coming with all-wheel-drive as standard. That rugged styling also has substance to back it up, with these models sitting 6cm higher than the regular car, while also coming with additional off-road settings and Hill Descent Control.

The current Cross Country may have been around for 18 months now, but it’s recently benefited from the firm’s latest mild-hybrid powertrains, which are standard-fit across the line-up. These bring light efficiency gains thanks to the electrical assistance.

Cross Country models come with a limited range of engines next to the V60, with one petrol and one diesel to choose from, while also missing out on the popular plug-in hybrid powertrain.

The diesel is a 194bhp 2.0-litre diesel (badged B4), but here we’re trying the mild-hybrid petrol, known as the B5. It’s a turbocharged 2.0-litre petrol producing 247bhp and 350Nm, and enables a 0-60mph time of 6.6 seconds and top speed of 112mph – the latter being the maximum speed on all new Volvos due to its mandatory speed limiter. Power is delivered to all four wheels through an eight-speed automatic gearbox.

And for a punchy petrol engine with all-wheel-drive, it’s also not as thirsty as you might expect – Volvo claims it will return 40.7mpg, with CO2 emissions of 157g/km.

Comfort is quite clearly the name of the game here, especially as the Cross Country comes with a suspension setup geared this way. Even on larger 19-inch alloy wheels on our test car, the ride is superb, offering exceptional comfort and feeling as if it’s floating over the road surface rather than driving on it. It’s a perfect match to this smooth and refined petrol engine, which doesn’t suffer from the gruff soundtrack you get with the diesel.

We didn’t get a chance to use the Cross Country away from tarmac, but with a dedicated off-road setting that can help when the going gets tricky, it’ll certainly help should you ever need to venture off the beaten track. Don’t expect to be scaling mountains and crossing rivers with it, though.

Whether you like the Cross Country’s rugged styling or not will be down to personal taste, but it’s certainly convincing.

Key differences to a regular V60 include wheelarch extensions, a revised grille and lower body protection, while that 6cm of extra ride height is certainly noticeable. It deserves to be applauded for not shouting too loudly about its off-roading credentials, though, as aside from those features it looks like any other V60. That’s a good thing, as with a crisp front end, prominent grille and great profile, it’s arguably one of the better-looking estate cars you can buy today.

Volvo interiors in recent years have taken a Russian doll approach – whereby the cabins all look identical to one another, regardless of model. That’s certainly not a criticism, especially when the V60’s cabin offers the same classy look and feel to its flagship XC90.

The quality is largely excellent, while all versions benefit from a digital dial setup and nine-inch portrait touchscreen, though if you look closely there are a few cheaper plastics used, which is a touch disappointing on a car of this price.

Cross Country models also remain just as practical as the standard V60 – offering a large 529-litre boot (or 1,441 litres with the rear seats folded) and generous room for all occupants.

The Cross Country is available in one spec, which sits somewhere between the entry-level Momentum model and high-spec Inscription on the regular V60.

It’s certainly not lacking in terms of standard kit, gaining leather upholstery, keyless starts and entry and a gesture-controlled electric boot as standard, along with the extra off-road settings, chunky styling and all-wheel-drive to help usher in the rugged feel.

As for pricing? The B5 here is available from £41,160, or £500 more if you fancy the less powerful diesel. It’s certainly not a cheap car, but given it’s not much more expensive than a regular V60 with the same engine and cheaper than its key rival – the Audi A4 Allroad – it’s relatively well-priced. Just be careful not to spend too much on optional extras, as this can quickly ramp up the price.

Rugged-looking estate cars have always proven a niche choice, and that hasn’t really changed. The market for a car of this type with genuine off-roading ability is quite small, but if you value that extra ability, a car like the Volvo V60 Cross Country makes a compelling case for itself.

This V60 is undoubtedly one of the best of its kind – offering a ridiculously comfortable ride, stunning interior and brilliant practicality, and it doesn’t really have any weakness. Before buying a similarly-priced SUV, have a look at this Volvo. You’re unlikely to be disappointed.