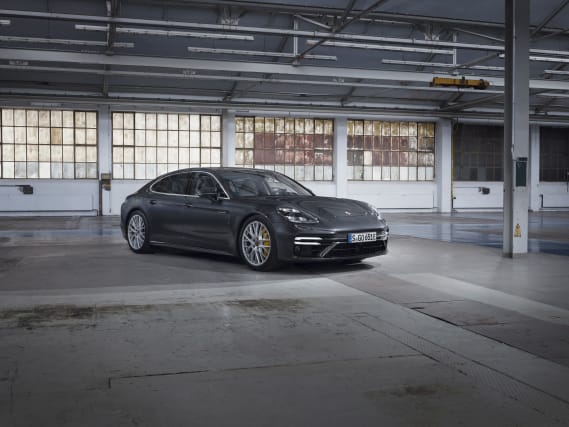 Porsche has broadened its Panamera range of cars with three updated variants.

The headline introduction is a new Turbo S E-Hybrid model, which takes the crown as the most powerful Porsche model currently on sale. Thanks to a 4.0-litre twin-turbo V8 engine combined with an electric motor, the Panamera pushes out 690bhp in total, resulting in a 0-60mph time of around three seconds and a top speed of 196mph. Prices for this model start from £140,130.

A larger battery – increased from 14.1kWh on the older models to 17.9kWh – also means that the Turbo S E-Hybrid will manage up to 31 miles on electric power alone while returning combined CO2 emissions of 62-63g/km.

A lower-powered Panamera 4 E-Hybrid has also been introduced, bringing a still respectable 456bhp from a 2.9-litre V6 which, again, is combined with an electric motor and batteries. Zero to 60mph will take 4.1 seconds while flat-out it’ll do 174mph. It takes its place underneath the previously-announced Panamera 4S E-Hybrid. Prices for the 4 E-Hybrid kick off from £83,720.

Finally, there’s the Panamera 4S which features no electrification but uses a twin-turbocharged V6 engine with 434bhp.

All cars have been given a light refresh over the previous-generation Panamera, while the estate-style Sport Turismo version remains available across the variety of powertrains, alongside the standard hatchback.