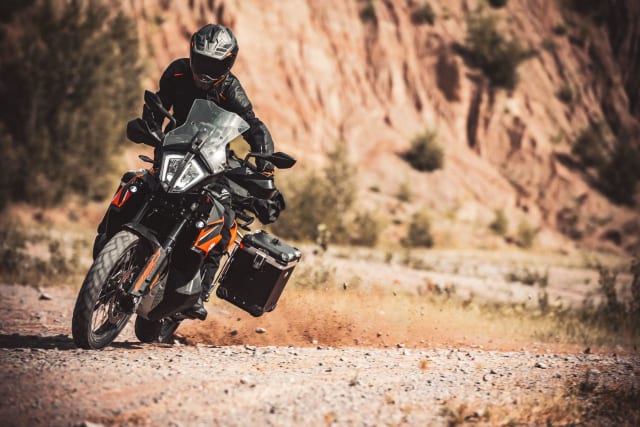 KTM’s new 890 Adventure has been introduced, bringing agility and performance to the segment.

Expected to arrive in the UK early next year, the 890 Adventure uses an 889cc parallel-twin engine producing 103bhp. As well as having plenty of performance on tap, the KTM’s engine is Euro5 compliant, too.

There’s also a new WP APEX rear shock which features adjustable damping and an additional hand adjuster to tailor the spring preload. KTM says that the suspension setup places the bike between ‘use for the tarmac and the trail’.

Joachim Sauer, KTM Product Manager Travel: “With the development of the new KTM 890 ADVENTURE we hit all our marks by offering an upgraded machine for both road and gravel riding. With the new engine we worked a lot on optimizing the overall performance and feeling while out riding. The result is a big improvement in the bike’s rideability, better stability, less gear shifting and added comfort for the long days on the saddle.”

The bike also benefits from ergonomics which, according to KTM, are inspired by the Dakar Rally, with a low seat height and slim overall dimensions ensuring that the 890 feels nimble and easy to manoeuvre.

It also incorporates a full-size TFT display, cornering ABS, traction control and a strong subframe which is up to the task of carrying a pillion passenger or additional baggage.

KTM also says that a wide variety of upgrades are available with features such as cruise control, heated seat and grips all able to be added later.