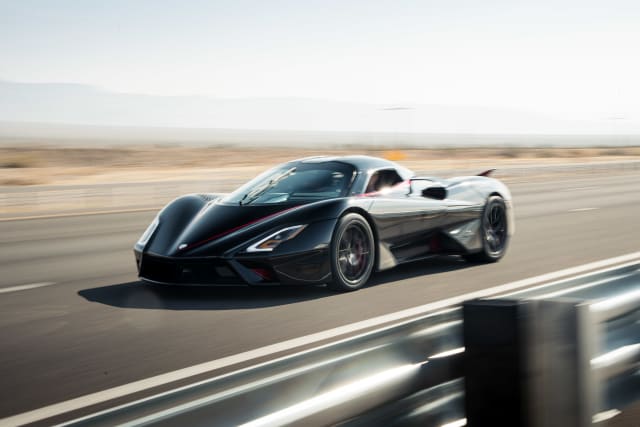 The SSC Tuatara has set a new top speed record for a production car after recording a two-way average of 316.11mph in Nevada.

The runs took place on a seven-mile stretch of closed road in the desert near Las Vegas with British racing driver Oliver Webb at the wheel.

The supercar, built by Shelby SuperCars North America, hit a top speed of 331mph on the second run. However, for the record to stand the car must set a speed in both directions to account for the wind – the first run saw 301mph on the speedometer.

The stretch of road used by SSC is the same section used by Koenigsegg when it took the Agera RS to a two-way average of 277.9mph in 2017. A documentary about the speed run is also being produced.Webb said: “There was definitely more in there. And with better conditions, I know we could have gone faster, as I approached 331 mph, the Tuatara climbed almost 20mph within the last five seconds. The car wasn’t running out of steam yet. The crosswinds are all that prevented us from realising the car’s limit.”

Jerod Shelby, CEO of SSC, added: “It’s been 10 years since we held this record with our first car, the Ultimate Aero, and the Tuatara is leagues ahead. Its performance reflects the dedication and focus with which we pursued this achievement.

“We came pretty close to meeting the theoretical numbers, which is astonishing to do in a real world setting on a public road.

“America’s new claim to victory in the ‘land-based space race’ is going to be tough to beat.”

The SSC Tuatara was first revealed in 2011 and has a 5.9-litre flat-plane crank V8 engine making an astonishing 1,750bhp. It has lightweight carbon-fibre bodywork and its design is focused on producing as little drag as possible to help top speed.