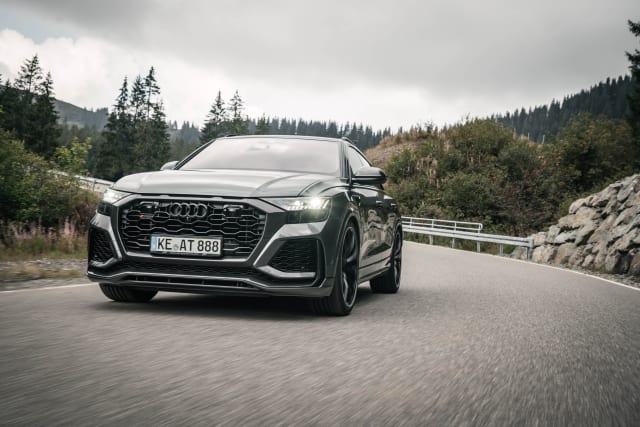 Performance tuner ABT has turned its attention to Audi’s RS Q8 SUV, adding performance parts which heighten the car’s dynamic skills even further.

ABT, which has already turned its attention to many of Audi’s core and performance models, has introduced a new optional exhaust system for the RS Q8. It features electrically controlled exhaust flaps on each side of the vehicle and four active pipes to create – what it calls – a ‘glorious resonance’.

The end pipes are finished in carbon fibre, while thanks to an integrated interference pipe and reduced exhaust backpressure, ABT says that the RS Q8 benefits from better throttle response over the standard car.

The car’s alloy wheels have also been upgraded. The 23-inch ABT High Performance GR wheels feature a gloss black finish and also receive a diamond-machined rim. Thanks to a one-piece manufacturing process, the wheels manage to be 40 per cent lighter than conventional cast wheels.

ABT has also added rear spoiler inserts crafted from carbon fibre, while the car’s air suspension has been adjusted thanks to the firm’s Level Control system. It allows the RS Q8 to be lowered even further than the standard car, dropping by 25mm in comfort modes, while a ‘Coffee Mode’ drops the car even further.

The Bavarian-based firm can also boost the car’s performance, reaching over 730bhp and 920Nm of torque.