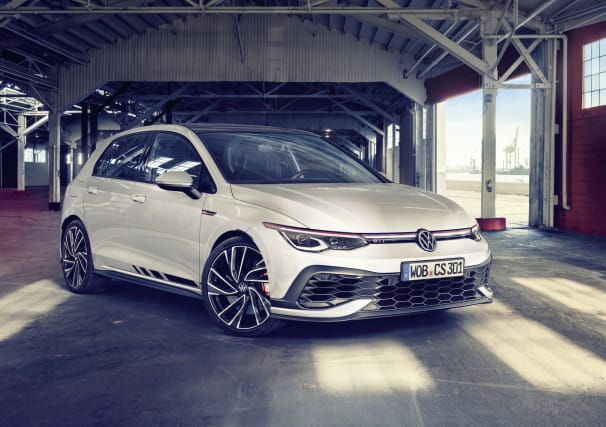 Volkswagen has introduced a new Clubsport variant of its latest Golf GTI.

Moving on from the original Clubsport which was first released in 2016, the new car brings more power and a series of other dynamic changes which help to make it even sharper than the regular GTI. Though the most powerful Golf for now, it’s likely that Clubsport’s title will be taken by the upcoming R version.

The exterior of the car is strikingly different from the standard GTI. It receives huge front air intakes and a two-part roof spoiler, while 18-inch alloy wheels come fitted as standard. A unique diffuser and wider side sills also help to give the Clubsport a wider, more muscular appearance.

Oval tailpipes also replace the round versions found on the standard GTI.

Underneath the bonnet sits a 2.0-litre turbocharged petrol engine with 296bhp – up from the standard GTI’s 242bhp – driven to the wheels via a seven-speed automatic gearbox. Gear selectors behind the steering wheel are also fitted as standard, giving the driver better control over the car’s gears. No manual version is due to be offered.

An electromechanical locking front differential heads up a series of chassis changes made to the Clubsport and replaces the solely electronic version on the regular GTI. Drivers are also able to tailor the differential to different driving situations via an in-car dynamics manager. For instance, the differential can be eased in comfort modes or made more aggressive when switching to sport settings.

The front camber has also been increased, while new control arm mounts, wheel mounts and a revised spring configuration have been included too. A full Dynamic Chassis Control system offers fifteen settings to allow drivers to tune the ride of the car to their exact liking.

The Clubsport’s brakes have been uprated too with large discs and two-piston calipers, while inside there’s Clubsport-specific stitching for the seats.

UK pricing for the Volkswagen Golf GTI Clubsport has yet to be announced, though order books are predicted to open before the end of the year.

Citroen updates pricing and trim level structure across its range