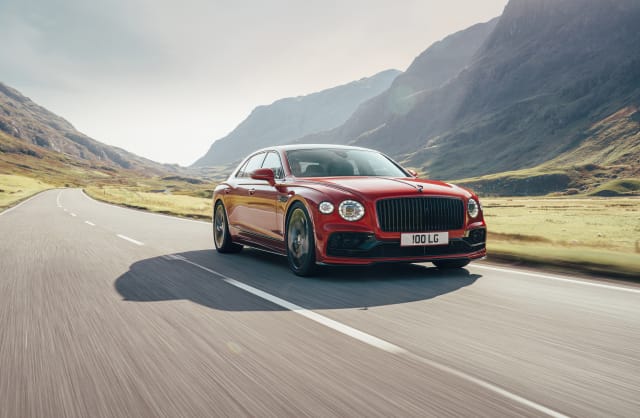 Bentley has introduced an alternative powertrain for its luxurious Flying Spur saloon.

The new V8 engine will sit alongside the existing W12-powered car which was released earlier this year.

Already used on the smaller Continental GT, the 4.0-litre twin-turbocharged unit produces 542bhp and 770Nm of torque and can power the Flying Spur from 0-60mph in just four seconds and onwards to a top speed of 198mph.

Some 100kg lighter than the W12 version, the V8-powered Flying Spur offers a 400-mile range thanks to cylinder deactivation tech which helps to improve fuel consumption.

The reduction in weight also allows the Flying Spur to be more agile than the W12 version thanks to improved overall weight distribution.

Innovations such as torque vectoring, adaptive air suspension and a drive dynamics controller are all fitted as standard, while buyers can also fit 48-volt electric active anti-roll bars as an optional extra for an even more composed ride.

The Flying Spur is available in both four- and five-seat configurations, while a special touchscreen allows those sitting in the back to access a range of settings such as the window blinds, rear-seat massage function and rear climate control.

Bentley’s rotating display is also available on the Flying Spur, incorporating a revolving display which can be used to relay a variety of different functions back to the driver. Apple CarPlay is included too, bringing easier smartphone integration to the system.

The new Flying Spur V8 is available to order now, though Bentley has yet to disclose full pricing for the model.