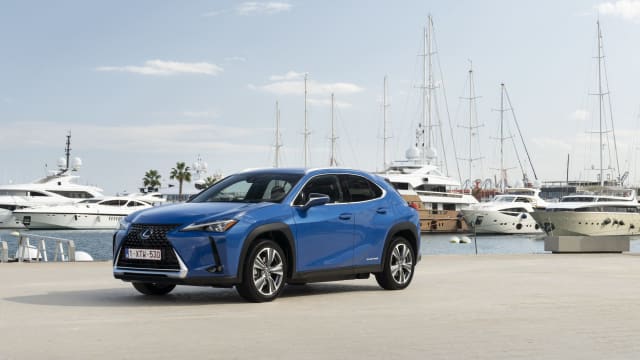 Electric cars seem like a perfect fit for the premium segment, because they offer a near-silent driving experience and smooth performance. So the new UX EV is a pretty big deal for Lexus, which has long had a reputation for building high-quality and reliable premium cars.

This is the Japanese firm's first electric vehicle, and it has opted to use the UX as its platform for two key reasons. The first is that this is an urban crossover, and charging infrastructure is likely to increase the most in cities.

But it's also the firm's entry-level model, and Lexus wants to democratise electrification, hoping to open EV ownership up to more buyers than it would with one of its pricier cars.

Being based on Lexus' best-selling model means that, aside from the powertrain, there aren't a great deal of other changes. There are a couple of EV-specific alloy wheel designs, shutters in the front grille that can close to reduce drag, a new air-cooled system for the battery cells and a new single-speed transmission.

Interestingly, where most other EVs have a smaller boot than traditionally fuelled equivalents because space is needed for the batteries, the UX 300e's boot is 367 litres, which is actually 47 litres larger than in the rest of the range. The one caveat is that rear cabin space is slightly worse.

The UX 300e uses a single-motor system that powers only the front wheels, making 201bhp and 300Nm of torque. Lexus says the new motor/generator is compact and lightweight, and has been engineered to deliver 'refined power'.

This is fuelled by a 54.35kWh lithium-ion battery pack that contributes to the car's 196-mile range.

It's fair to say Lexus has succeeded in its attempts to provide a smooth power delivery. This is a trait common to all electric vehicles, but the UX 300e is extra slick. Keep it in normal or eco modes and there's a linear response as you gain speed, with a decent punch if you need it. Twist the dial to sport, though, and acceleration is incredibly brisk for a crossover, yet without losing its premium smoothness.

We appear to be in phase two of electric vehicle production. While most manufacturers have been attempting to offer as much range as possible, making cars heavy as they pack as many batteries in as possible, we're seeing more manufacturers step back.

With 196 miles between charges range anxiety should not be a consideration, but Lexus says it could have made the battery bigger. By refraining, it keeps weight lower, which improves handling and means the suspension doesn't have to be so stiff. Much like the Mazda CX-30 and Honda e, the result is a more comfortable drive.

It's no sports car, but the UX 300e is fun to drive at a brisk pace – though these improved dynamics can also be felt at all speeds.

Lexus's cars stand out from the crowd, with their sharp angles and bold grilles. This is true of the UX, too, because despite being a humble crossover, it looks like no other. There are two new alloy wheel designs, with the 17-inch option getting aerodynamic flaps that regulate airflow.

It's also aerodynamically sound, thanks in part to its coupe-like design, while the rear has been optimised to reduce air pressure and therefore increase stability. Despite its premium status, the UX gets chunky wheel arch extensions that make it more ready for the rough and tumble of urban driving.

As we've come to expect from Lexus, the interior has a cool and sophisticated ambience, quite unlike the stand-out styling on the outside. This is no bad thing, particularly for an EV, because the relaxing drive is only emphasised by the calming cabin. If you're drawn to the UX by the more extroverted aspects of its exterior design, you might be left underwhelmed by the cabin, though.

However, if you can get past its subdued nature, it's a spacious and comfortable place to sit, with quality materials used across all major touchpoints. The central infotainment screen is quite subtle by 2020 trends, but being able to use the climate controls on physical buttons is great. Lexus still persists with its frustratingly awkward trackpad control for the menus, while the user interface is unintuitive, as is the norm for the brand, making this one of the few negatives inside.

There are three trim levels available, with the standard UX 300e starting at £40,900 after the government's plug-in car grant. Equipment is generous at this price, with the seven-inch infotainment screen, dual-zone climate controls, reversing camera, cloth upholstery, LED headlights and 17-inch alloy wheels.

Upgrade to the Premium Plus Pack, with prices starting at £44,400, and you also get leather upholstery, heated steering wheel, heated front and rear seats, rear privacy glass and wireless phone charging.

The Lexus UX is already a great premium crossover, and adding an electric powertrain only improves it. By not fitting a massive battery Lexus has managed to find a great compromise between having a decent range while not impacting driving dynamics too much.

It's not cheap, but it fares well compared with rivals such as the Tesla Model 3, boasting less expensive monthly payments thanks to its better residuals. For buyers looking for an EV at this price point, Lexus's build quality, reliability and brand image make the UX 300e an appealing choice.