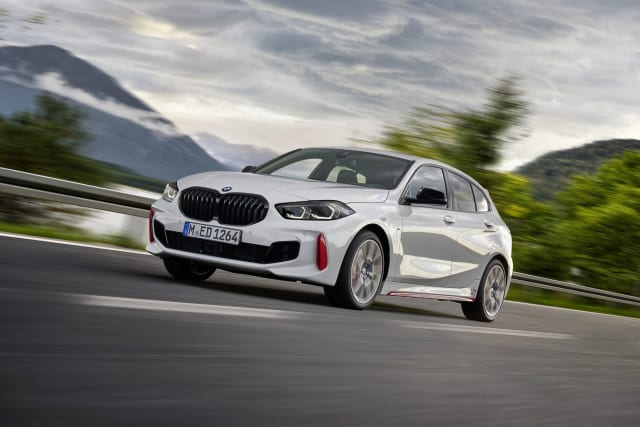 The new car, which is designed to slot underneath the range-topping M135i, brings a whole host of standard equipment as well as a variety of performance-based features.

Underneath the bonnet sits a 2.0-litre engine turbocharged petrol engine with 261bhp and 400Nm of torque, driving power through an eight-speed automatic gearbox to the front wheels alone. As well as specially tuned M Sport suspension, the 128ti also receives a Torsen limited-slip differential as standard, further enhancing the car’s cornering abilities.

It also benefits from the brakes and anti-roll bars of the more powerful M135i, but manages to be 80kg lighter than this model.

Based on the existing M Sport specification, the 128ti features a full sport bodykit, as well as air intakes and front apron from the M135i. In addition, the side sills get unique ‘ti’ badging, while a variety of high-gloss elements – such as the kidney grille and tailpipe finishers – contrast the one of four exterior colours.

Light-alloy 18-inch wheels are included too and are exclusive to the model, while inside red accents have been used to highlight certain areas of the cabin. A red ‘ti’ badge has been stitched into the central armrest too, while standard equipment also includes M seat belts – among other features.

A central 10.25-inch screen is included as well, while a 9.2-inch head-up display can be fitted as an optional extra. Folding mirrors, heated seats and ambient lighting are also fitted as standard.

When it comes to boot space, there’s 380 litres of room as standard, which can be increased to 1,200 litres by folding down the rear seats.

Modern cars are so big they’re making parking a nightmare