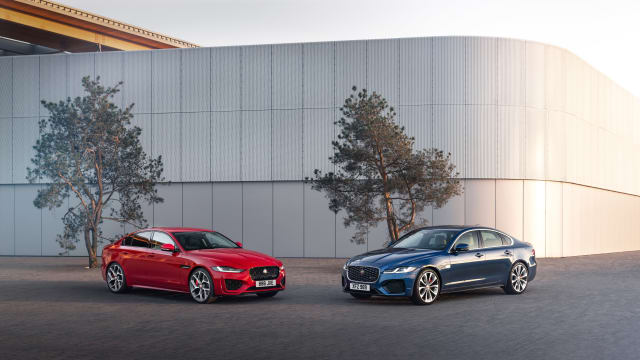 Jaguar has unveiled updated versions of both its XE and XF models, which utilise the firm’s latest infotainment system and gain new mild-hybrid powertrains.

It’s the XF that’s the big news here as this BMW 5 Series-rivalling model receives its first major refresh since its reveal more than five years ago.

It gains a new look, including a fresh grille, new bumpers and full LED headlights, but it’s the interior that’s seen the biggest change. A new 11.4-inch curved touchscreen has been introduced alongside a 12.3-inch digital dial system to give the cabin a far more modern feel.

It also comes integrated with an e-sim for enhanced connectivity functions, while over-the-air updates will keep the systems up-to-date at all times. Apple CarPlay and Android Auto are also both now included as standard.

Elsewhere inside, there are new massaging seats, greater interior storage and a new centre console that features wireless smartphone charging. As an optional extra, there is a new system called ‘Active Road Noise Cancellation’ that delivers sound waves that cancel out any noise caused by vibrations from the road surface to offer a more hushed driving experience.

Moving over to the smaller Audi A4-rivalling XE, changes are more limited as this saloon was only facelifted last year, though it also benefits from the new Pivi Pro media system on a smaller 10-inch screen. A new R-Dynamic Black trim is also available, gaining black 19-inch alloy wheels with red brake callipers and a black design kit.

Rawdon Glover, managing director, Jaguar Land Rover UK, said: “We are delighted to introduce our upgraded and streamlined XF and XE ranges. With significant enhancements to technology and design for the new XF, and further refinements building on the success of XE, customers get more of the features they love and new features that add even more desirability and excitement.”

On both the XE and XF, Jaguar has slimmed the range significantly – halving the number of derivatives available compared to before and focusing on the models that sell best and retain the most value.

Both models are available with the same choice of four-cylinder engines – a new 201bhp diesel (D200) that’s 24bhp more powerful than the one it replaces and a petrol with either 247bhp (P250) or 296bhp (P300). The diesel also gains new 48-volt mild-hybrid technology to maximise efficiency. Plug-in hybrid powertrains remain off the cards, though.

The slimmed-down range has also allowed Jaguar to cut prices on both by as much as 18 per cent, with the XE available from £29,635 and the XF from £32,585, or £35,990 in Sportbrake (estate) form – undercutting rivals from BMW and Mercedes by some margin. Both are available to order now.