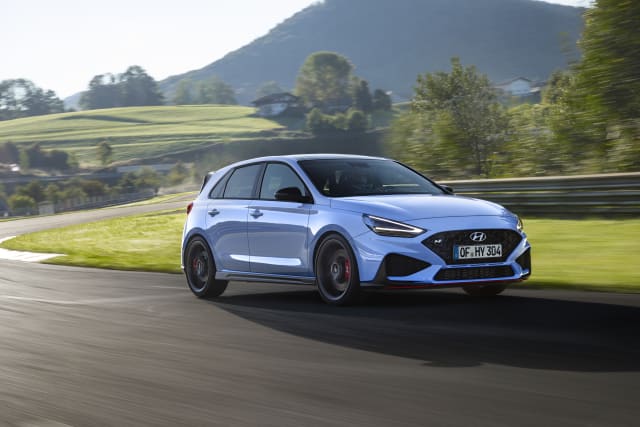 Hyundai has revealed the facelifted i30 N – a model tasked with rivalling the likes of the new Volkswagen Golf GTI and Ford Focus ST.

First introduced in 2017 as Hyundai’s debut true hot hatch, it was an instant hit, with the firm racking up 25,000 sales since launch across hatchback and fastback guises.

And keen not to mess with the winning formula too much, Hyundai has now updated the i30 N. Notable design changes include LED headlights being fitted as standard, V-shaped running lights and a wider grille. Top-spec N Performance models feature a revised set of 19-inch alloy wheels, while at the rear larger exhaust pipes give it an even more aggressive look.

New lightweight Alcantara and leather sports seats are available, too, while the cabin now comes with the model’s trademark Performance Blue stitching throughout. Hyundai’s latest 10.25-inch media system is also available as an optional, though an eight-inch unit still comes as standard.

The i30 N’s 2.0-litre petrol engine still produces 247bhp in its standard guise, though the N Performance version has had a 5bhp and 39Nm boost – now producing 276bhp and 392Nm of torque. But key to this update is a new eight-speed dual-clutch automatic gearbox – the first time an auto ‘box has been offered on an i30 N – though a six-speed manual remains available.

This automatic gearbox – alongside the standard drive modes – allows for three new performance functions that tweak the way the power is delivered, known as ‘Grin’, ‘Power’ and ‘Track Sense’.

Thomas Schemera, executive vice president and head of product division at Hyundai Motor Company, said: “Since its market debut in 2017, the Hyundai N original high-performance car has received multiple outstanding reviews and awards. Drivers seeking maximum fun-to-drive on the road as well as on the track, now receive an even wider range of performance and design features, with the new Hyundai i30 N.”

Order books for the i30 N are set to open at the start of 2021, with full prices and specs yet to be announced.