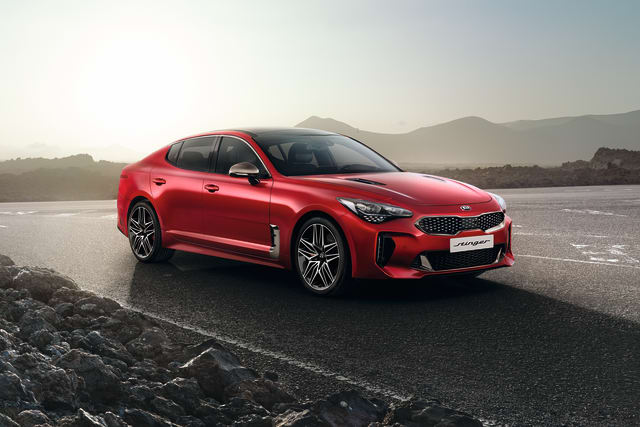 Kia has breathed new life into its distinctive Stinger saloon, bringing a range of updates to its flagship model.

New LED headlights have been included with matching LED daytime running lights, while the lights at the rear of the car have been updated too. New turn signals which each contain 10 individual LED units, have been arranged to resemble the appearance of a chequered flag.

In addition, a new 19-inch aluminium wheel design has been included on the Stinger. An additional colour – ‘Ascot Green’ – has been added to the list of Kia’s exterior shades too.

Inside the overall look of the cabin remains unchanged, though the materials have been lifted slightly to improve the perception of quality. A new metallic finish has been added to sections of the steering wheel, while the rear-view mirror has been given a clean, frameless design.

A new upgraded 10.25-inch infotainment and navigation system has been fitted to the middle of the dash, and it incorporates both Apple CarPlay and Android Auto. A seven-inch digital display has also been included in the instrument cluster which displays key information such as speed and revs.

Kia has also removed the less powerful engines from the line-up – leaving just the 3.3-litre twin-turbocharged petrol V6 powertrain as the only option. It delivers 365bhp and 510Nm of torque, resulting in a 0-60mph time of 4.6 seconds. In fact, the new engine makes the Stinger the fastest-accelerating Kia ever sold in Europe.

A new range of assistance systems have been included too, while existing ones have been upgraded in order to make the Stinger even safer.

Prices and full specifications for the Stinger have yet to be announced.