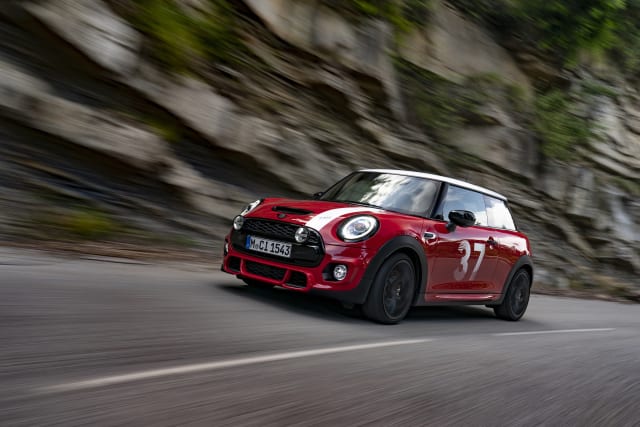 Mini has launched a limited edition version of its three-door Hatch to commemorate its 1964 Monte Carlo Rally win.

Along with English co-pilot Henry Liddon, Hopkirk became one of the biggest names in British motorsport. His victory was made all the more impressive because of the fact the pair beat rivals with much more powerful cars, beginning Mini’s legacy as a giant killer in motorsport.

The new edition remembers that win with a large number 37 on the doors – the number Hopkirk raced to victory in. It also gets lightweight 17-inch alloy wheels, high-gloss black finishes to various exterior parts, and an Alcantara steering wheel inside.

Other features include a ‘Paddy Hopkirk Monte Carlo’ sticker set and a single white bonnet stripe that has ‘33 EJB’ etched into it – the number plate of the winning car.

This model also gets some optional equipment included as standard, such as the Navigation and Comfort Packs, as well as various parts finished in piano black.

The Mini Paddy Hopkirk Edition can be ordered now, with prices starting at £27,045 and deliveries commencing in November 2020.