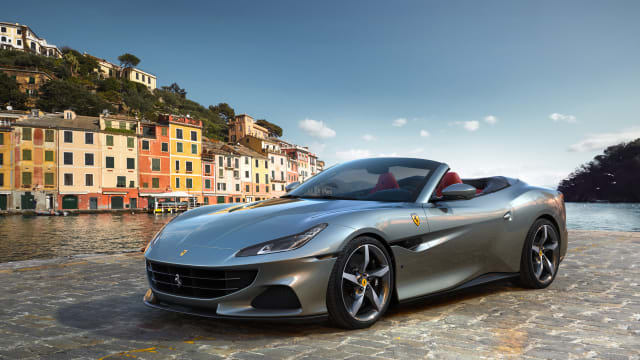 Ferrari has introduced a new, more powerful version of its Portofino convertible.

Badged M, the new model was revealed today in a completely online-based presentation – the first Ferrari to ever be showcased this way.

The Portofino M (which stands for Modificata, a moniker historically used by the firm to showcase models with upgraded performance) receives light exterior upgrades with a new bumper design being one of the largest changes.

However, the Portofino M’s 3.9-litre twin-turbocharged V8 has been raised to 612bhp from the standard car’s 592bhp. Driving it to the rear wheels is an eight-speed dual-clutch automatic gearbox, which replaces the older seven-speed component. The new gearbox incorporates a clutch module which is 20 per cent smaller than before, yet can help deliver 35 per cent more torque.

A new Manettino switch has also been fitted to the Portofino M, bringing five individual driver modes instead of the previous car’s three. A new Race mode is included which allows the car to adjust the brake pressure on all four wheels, allowing slides to be kept under control without forsaking driver involvement. Drivers have Wet, Comfort, Sport, Race and ESC-Off selections to choose from.

Though Ferrari has yet to disclose any performance figures, expect these changes to help reduce acceleration times. Prices for the new Portofino M are due to be released shortly but expect them to be higher than the regular car’s £166,180 starting price.