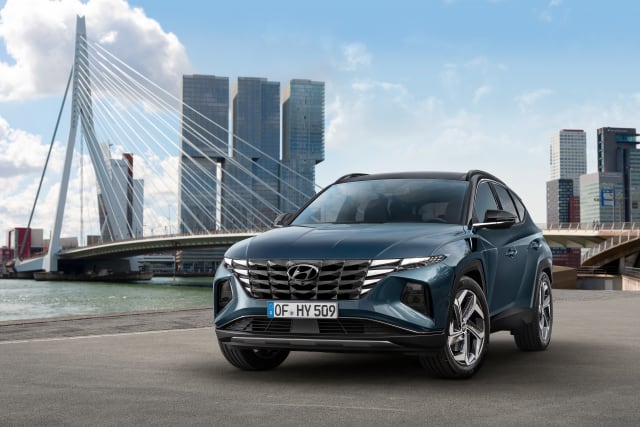 Hyundai has lifted the lid on its latest Tucson, bringing more technological advances and edgy new styling to the firm’s popular SUV.

The new car manages to utilise many of the styling touches incorporated into 2019’s Vision T Concept PHEV, chief among them are new ‘Parametric Hidden Lights’ which appear to blend into the car’s bodywork during the day, but are visible through the grille at night.

The same feature is used at the rear of the car, while the bumper has been designed to include parametric patterns with a three-dimensional effect.

Bigger and wider than the car it replaces, the new Tucson is able to deliver more in the way of space and practicality than before Three-zone climate control allows passengers in the rear seats to adjust their own cabin temperature independently of those sat ahead of them, while ‘Rear Sleeping Mode’ means that those sat at the front of the cabin can listen to their selected audio without it being transmitted to the rear.

Boot space has also increased, rising by up to 107 litres depending on the engine chosen and offering up to 620 litres with the seats in place or 1,799 with them folded flat.

A range of new electrified powertrains are making an appearance on the new Tucson too, with petrol and diesel mild-hybrids sitting alongside a regular hybrid and a plug-in hybrid. With power outputs of up to 261bhp, it’s the latter two which take position as the most powerful engines in the car’s line-up.

Hyundai has also incorporated a sweeping series of assistance systems to ensure that the Tucson remains as safe as possible. A new airbag system helps to prevent front passengers from colliding with one another, while an adaptive cruise control system can adjust the speed not only for traffic, but also corners too.

Inside, you’ll find a new 10.25-inch infotainment screen housed within a gloss black section to give a glass-like appearance. Traditional buttons have been removed and replaced for touch sensitive versions, while a new Bluelink service allows users to take advantage of additional connected services.

First deliveries are expected to commence before the end of the year, while plug-in hybrid variants will arrive in 2021.