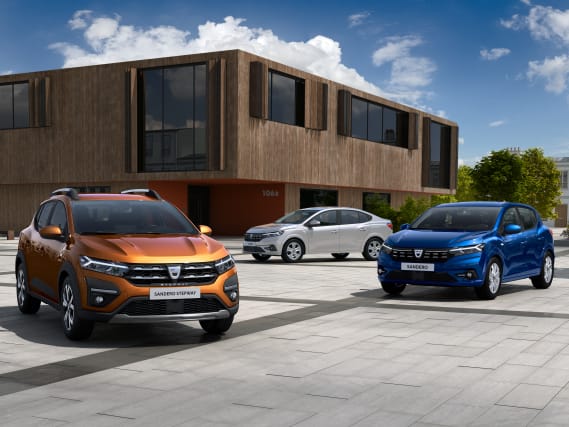 Britain’s most affordable new car range is receiving an overhaul for 2021, with Dacia updating the Sandero, Sandero Stepway and Logan.

The Romanian firm is introducing the third generation of each model, with ‘increased style, equipment and versatility whilst retaining the fundamentals of simplicity and reliability’.

The Sandero, which is best known for being the cheapest new car on sale today, gets a number of design tweaks, including a more sloping windscreen, a lower roofline, wider track and flush-mounted wheels.

The Sandero Stepway is the crossover-version of the popular hatchback, offering a more robust appearance. The 2021 versions get a new domed bonnet, a chrome Stepway logo under the grille, and curved fenders.

Meanwhile, the new Logan – a practical saloon car – gets a more flowing roofline that gives a slightly longer appearance and smaller side windows.

Each of these cars also receive Dacia’s new Y-shaped light signature, which makes the third generation model stand out from earlier models. A strip between the lights helps to give the cars a wider appearance.

Details about the cars’ specifications or technical changes have not yet been announced, but the full car reveal is scheduled for September 29.

The previous Sandero was based on the underpinnings of the third-generation Renault Clio, which is what helped to keep costs low. However, to comply with safety and emissions rules, it’s likely this platform will be updated to the same platform used by the new Clio and Nissan Juke. Dacia will be keen to keep its place as the most affordable car brand, but it’s likely this updated will increase costs somewhat.