UK Drive: The Kia XCeed PHEV is an efficient but impractical crossover 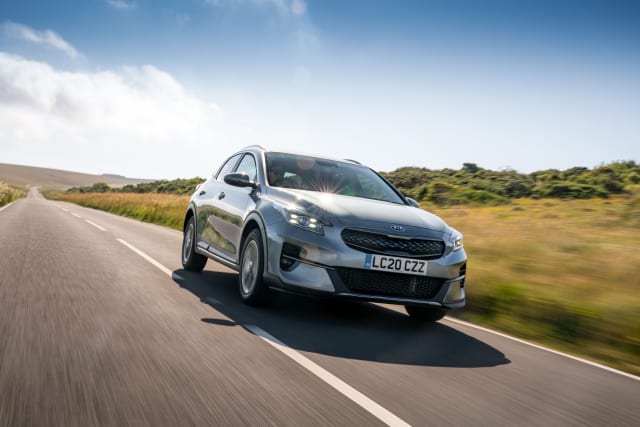 We’d forgive you if you’re a bit bamboozled by Kia’s current line-up.There’s the Ceed hatchback, the Ceed SW estate and the Proceed (basically a shooting brake-cross-estate) and the most recent addition is the XCeed crossover.

The XCeed would make perfect sense if it was the first Kia crossover of its kind. But it’s not. There’s the hugely popular Sportage that offers a lot more space for similar money, the electrified Niro, the Soul EV and also the smaller Stonic.

So the XCeed’s place seems a bit muddled, with Kia’s official line being that it is “represents a sporty alternative to traditional SUVs”.

The XCeed has been around since the middle of 2019, and despite its confusing positioning, it’s sold well for the firm with its range of efficient petrol and diesel engines.And now there is a new plug-in hybrid version, which is the first electrified Ceed version, and debuts just ahead of a PHEV derivative of the Ceed SW estate – both utilising the petrol-electric powertrain you find in the Niro.

So it’s the XCeed’s powertrain that’s the important bit here, but it also comes with slight styling tweaks and revised trims, too.

The XCeed comes with a 1.6-litre petrol engine mated to an electric motor and 8.9kWh battery. Unlike other hybrids, which favour sluggish CVT gearboxes, the XCeed instead uses a smoother six-speed dual-clutch automatic transmission.

Efficiency has been prioritised over performance too, as together the motor and engine generate a modest 139bhp and 265Nm of torque. That allows for a 0-60mph time of 10.4 seconds and a top speed of 107mph. But it’s the low running costs that impress, with a claimed 36-mile electric range (expect around 30 driven in normal conditions), while Kia says it will return more than 200mpg, with low CO2 emissions of 32g/km making this a seriously credible company car.

As with most plug-in hybrids, you’ll quickly appreciate the refinement and smoothness associated with electric power. With the XCeed you have to be light on the throttle if you want to avoid the engine kicking into life – something which it likes doing a surprising amount if you stick into the ‘Automatic’ setting.

In the default ‘Eco’ driving mode, the throttle response is also rather numb, though ‘Sport’ – the only other mode – is overly sharp for a PHEV like this. It’s a shame a ‘Normal’ setting doesn’t exist to get the balance just right.

On the plus side, it’s a very easy car to drive, with light controls and impressive refinement – even when the engine’s running – and it’s largely very comfortable, which is no doubt helped by the small 16-inch alloy wheels on our ‘3’ spec test car.

In terms of styling, the XCeed is more of a plastic-clad hatchback than it is a crossover, though it’s certainly successful with its looks. With just a thin strip of cladding on the wheelarches and sills, it successfully conveys over that rugged image.

Outside of the hugely glamorous Proceed, the XCeed is the next best-looking of the Ceed derivatives in our eyes, with neat proportions and sharp LED lights at the front and rear. Plug-in hybrid versions are also separated from the regular XCeed by a closed ‘tiger nose’ along with the charging point in the front left wing and discreet ‘eco plug-in’ badging.

Kia has seriously stepped up its game in recent years when it comes to the quality and look of its cars’ interiors and the XCeed’s cabin is no exception. The standard of the materials used throughout is excellent, with a brilliantly intuitive layout of controls as well. A large 10.25-inch touchscreen as standard, which alongside smartphone mirroring and sat-nav, displays some very useful hybrid data.

But there’s a downside and that’s a limited amount of space. Due to the room the battery takes up, boot volume is reduced by a significant 135 litres – leaving just 291 litres. To put that into perspective, that’s less than the majority of superminis. Rear space is also poor, with adults likely to struggle to get comfortable and a high window line meaning children won’t be able to have a proper look out.

There will be few grumbles when it comes to standard kit, with even the entry-level ‘3’ grade featuring a large touchscreen, dual-zone climate control, LED headlights, keyless entry and start and heated front seats.

The only other spec is the First Edition, which adds luxuries like leather upholstery, park assist, heated rear seats and a panoramic sunroof.

In terms of pricing, the XCeed PHEV starts from £30,695, with the First Edition available from £34,695. That’s a full £5,000 more than the 1.4-litre petrol engine with the same power and spec, meaning you’ll really have to make the most of that electricity to save money in the long run.

It’s no surprise given Kia’s expertise with electrified models that the new XCeed PHEV features a brilliantly well-integrated powertrain and is seriously efficient if you charge the car as often as possible.

But this electrification comes at the expense of practicality, and given how much less roomy it is than the regular XCeed, it makes it hard to recommend given the steep jump in price. It’s also a rather confusing prospect to get your head around – given the XCeed is trying to be an SUV, but has a low seating position, so doesn’t feel like one.

That said, if you’re not fussed about spaciousness and like the way the XCeed looks, you’ll be left with an appealing plug-in hybrid that will be very cheap to run and seriously well-equipped.