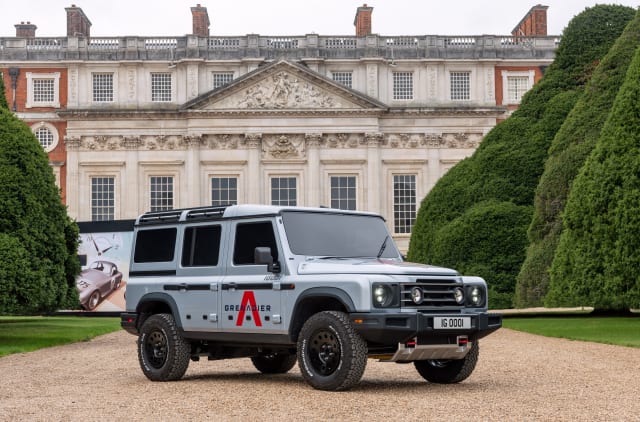 The new Ineos Grenadier prototype has been showcased in the UK for the first time.

Displayed at London’s Concours of Elegance, the Grenadier has been put on display alongside other off-roaders that inspired its design.

Vehicles such as the Mercedes G-Wagen, Toyota Land Cruiser and a Willys Jeep parked with the Grenadier form part of Ineos’ own private fleet. One of the earliest known examples of a Land Rover Series I has made an appearance too.

The Grenadier is a brand-new off-roader which has been designed from the ground-up to be as capable as possible on difficult and mountainous terrain. Packing BMW-sourced engines, it will be available as a five-door version initially, though Ineos has stated that a four-door pick-up truck variant will arrive after.

Sir Jim Ratcliffe, founder and majority owner of petrochemicals group Ineos, came up with the idea for a Land Rover replacement and named it after his favourite pub in Belgravia, London.

He enlisted the help of superyacht designer Toby Ecuyer to head up the design team for the Grenadier, while former chemical engineer Dirk Heilmann was appointed Ineos Automotive CEO and given the challenge of putting together the car’s off-road tech.

Dynamic testing has already commenced, and it’s expected that the Grenadier will go on sale midway through 2022.