The Volta Zero is the first electric 16-tonne commercial vehicle 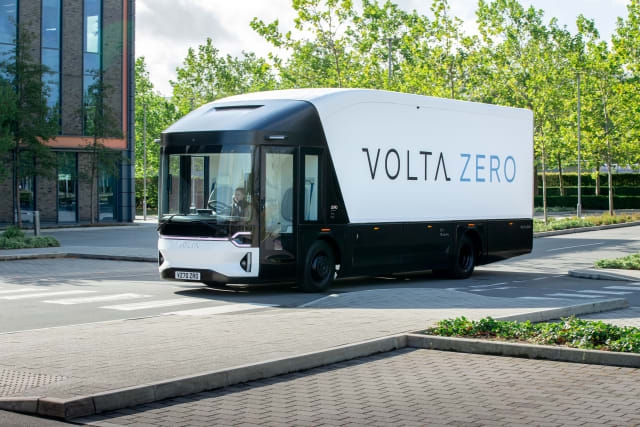 The electric motor uses a new ‘e-Axle’ set-up to power the rear wheels, rather than the traditional driveshaft. The single electric motor, transmissions and axle are contained within a single unit that Volta says is lighter and more efficient.

Batteries are offered in 160 to 200kWh of capacity, with lithium iron phosphate batteries used in place of the nickel cobalt manganese usually used in passenger cars, because Volta says this makes it easier to adapt the pack based on a customer’s specific vehicle requirements.

The Zero has a payload of 8,600kg and an overall volume of 37.7 cubic metres, with space for 16 Euro pallets. The cargo box can be refrigerated as an option too, with this system run by the main battery pack to keep emissions low.

Volta says the removal of a traditional engine meant it could rethink how trucks are designed, with the safety of vulnerable road users put at the core of its design. It has 220 degrees of direct vision around the vehicle, making it easier to spot cyclists and pedestrians, while drivers also sit much lower than a traditional truck driver.

Carl-Magnus Norden, founder of Volta Trucks, said: “Safety is at the heart of the Volta brand for one simple reason. In London, as an example, 23 per cent of pedestrian fatalities and 58 per cent of cyclist deaths involve an HGV, yet large trucks only account for four per cent of road miles.

“This is clearly unacceptable and must change. The Volta Zero completely reimagines the commercial vehicle, ensuring it can operate safely with all road users and become a friend of the zero-emission city.”

Prodrive and Astheimer in the UK are working together to build the launch vehicle, with the production of 12 pilot fleet vehicles coming in the first half of 2021. These will also be built in the UK before being used for testing with various European logistics companies.

Final production models are anticipated to be built in the UK from 2022, though Volta Trucks is still working to find a manufacturing partner.