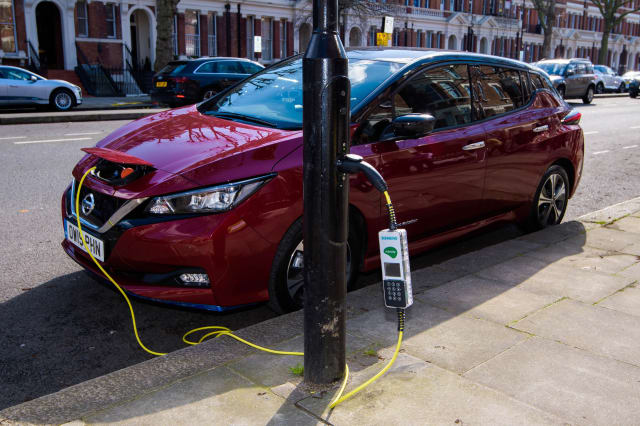 The Government is being urged to accelerate the take-up of clean cars, as polling suggested many people are not planning to switch to electric vehicles soon.

Ministers have proposed to phase out sales of new conventional petrol and diesel cars by 2035 – and potentially earlier – as part of efforts to tackle climate change and air pollution.

The Society of Motor Manufacturers and Traders (SMMT) is calling on ministers to commit to significant long-term incentives for electric vehicle (EV) purchases and binding targets on charging infrastructure amid concerns over costs and the ability to charge up easily.

The industry body wants no tax on cars that are capable of zero emissions and a long-term commitment to plug-in grants which reduce the cost of electric cars.

Plug-in hybrids should also qualify for the financial benefits, the SMMT said.

This funding would reduce the upfront price of a family car by an average of £5,500 for battery electric cars and £4,750 for plug-in hybrids, and for an SUV by £9,750 and £8,000 respectively – helping to drive 2.4 million sales over the next five years, the organisation said.

The SMMT also said £16.7 billion investment is needed to get the UK’s public charging network ready for the mass EV market, with 507 new charge points needed every day until 2035 to ensure consumers are confident they will be able to charge.

“Sales of EVs are picking up but they’re still a new technology, and it’s an expensive technology.

“We need carrots, not sticks, and confidence, not confusion. We need to reassure consumers, most notably about charging.”

A survey for the SMMT by Savanta Comres found that almost 10% thought they would buy an electric vehicle this year or in the next 12 months and a further 27% were planning on buying one by 2025.

But more than two-fifths (43%) of more than 1,400 people quizzed thought they would not be buying an electric car until after 2035, could not see themselves ever owning one or did not know when they might buy one.

The polling also found almost half (49%) expected their next car purchase to be a petrol or diesel vehicle. It suggests the public see benefits to electric cars including lower running costs and helping the environment, but are put off by higher purchase prices, lack of local charging points and fear of running out of charge on longer journeys.

Electric vehicles make up 8% of new car sales today, but that could increase to 28% by 2025 with support from the Government and other organisations, the SMMT said.

“To give consumers confidence to take the leap into these technologies, we need government and other sectors to step up and match manufacturers’ commitment by investing in the incentives and infrastructure needed to power our electric future.

“Until these vehicles are as affordable to buy and as easy to own and operate as conventional cars, we risk the UK being in the slow lane, undermining industry investment and holding back progress.”

A Department for Transport spokesperson said: “Our £2.5bn programme to support grants for plug in vehicles and funding for charge point infrastructure at homes, workplaces, on residential streets and across the wider roads network are all part of our world-leading package to encourage electric vehicle uptake.

“We are committed to building a greener transport system, reducing carbon emissions and boosting economic growth in the UK which is why we’re supporting the transition to zero emission vehicles alongside our consultation on bringing forward the end to the sale of new petrol and diesel cars and vans.”