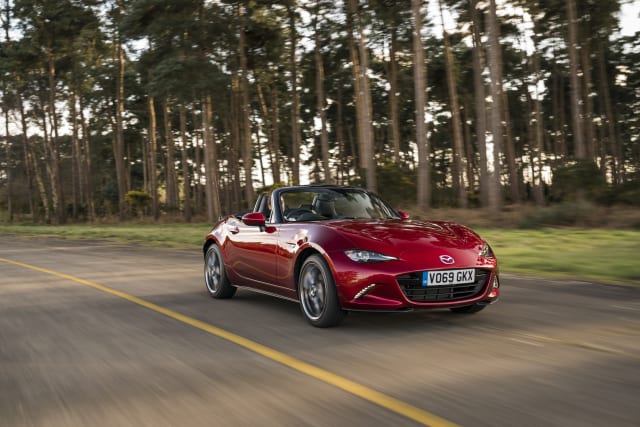 In a similar vein to the Porsche 911 and VW Beetle, this is Mazda’s icon – the MX-5 – and it shows what this manufacturer is all about, which is producing fun cars that aren’t overly complicated and that are affordable, too.The MX-5 is now the world’s best-selling roadster and has been around for more than three decades, and in that time it might have got bigger, it might have got techier and also safer, but it’s also remained a true two-seat roadster.

But can the MX-5 deliver the mix of thrills and creature comforts that buyers are increasingly expecting? We’ve been out in one of the latest versions to find out.

In truth, very little is new about the latest MX-5. Now in its fourth generation, which has been around since 2015, Mazda gave the model a few tweaks in September 2018 – most notably with the introduction of a more powerful 2.0-litre petrol engine – and there’s been the usual choice of special editions that this roadster has become known for.For 2020 there’s also a new top-spec GT Sport Tech trim level, which is marked out by 17-inch BBS alloy wheels and burgundy leather seats, while the rest of the range benefits from improvements in standard safety kit and other equipment – including reversing cameras and adaptive LED headlights.

Just like before, there are two petrol engines to choose from – a 1.5-litre and a 2.0-litre. Neither are turbocharged and escape any kind of electrification. It’s the more powerful engine which is in our test car, where it produces 181bhp and 205Nm of torque.It might not sound all that much for a sports car – especially given you can get that kind of power in a diesel Golf – but it’s lightness that’s key here, and means the MX-5 can get to 60mph in 6.3 seconds and hit 136mph flat-out. It also gets the two-seat roadster recipe nailed, with power being sent to the rear wheels through a six-speed manual gearbox.

The MX-5’s also really good on fuel – Mazda claims it’ll achieve 40.9mpg, but we got those kinds of figures even when driving it pretty hard. CO2 emissions of 155g/km are also credible.

In a world of over-complicated cars and driver assistance tech, the MX-5 is reassuringly simple and back-to-basics. And it’s all the better for it.You’ll want to drop the manual-folding roof, which can be lowered in a matter of seconds, at any opportunity, and do that and you’ll be grinning like a Cheshire cat.

The MX-5 feels light, nimble and agile, and though the steering might not have the most weight to it, it’s still a brilliant car to pilot along. It also manages to be remarkably comfortable, and with performance that you can enjoy without the risk of losing your licence, it’s a car that would be an absolute joy to use every day with little compromise.

Out of all the brands you could choose today, we’d argue that it’s Mazda that has the best-looking line-up of any. Known as ‘Kodo Design’, the Japanese firm’s styling is all about simplifying things and that’s exactly what it’s done with the MX-5.

This roadster also has near-perfect proportions, with a stunningly sleek body, long bonnet and perfect front and rear overhangs. We found it got admiring glances and nods of appreciation wherever it went, and deservedly so.

Our test car also came in Mazda’s trademark Soul Red Crystal colour, which, while a bit pricey at £790, is well worth the money in our view.

Given the MX-5’s compact shape and long bonnet, it’s not really a huge surprise to say the interior is compact at best. It’s not the most elegant car to get into, but once you’re in there’s more room than you might expect, and a six feet tall driver will still be able to get comfortable thanks to plenty of adjustment.

The cabin itself is also well-appointed, with a fantastic media system and clear dials being the highlights, while body-coloured door panels look great as well. The quality itself is a little underwhelming, though, with plenty of hard plastics littering the cabin. The 130-litre boot is also tiny, but that’s not really such a surprise.

New standard safety kit (offered on Sport trim and upwards) also includes autonomous emergency braking at the front and rear and lane-keep assist, while our Sport Tech test car came with just about everything you could ask for – such as adaptive LED headlights, a reversing camera and leather upholstery.

Prices for the MX-5 start from £23,800, but to benefit from the larger engine, you need the Sport Tech grade, which costs from £28,405. It might seem a lot of money, but we’d argue given the thrills on offer and the lengthy equipment list, the MX-5 is actually rather good value.

Another year goes by and the MX-5 continues to excel with only minimal updates. The driving experience is truly perfected for a car like this – offering something you could enjoy on every drive well within the speed limit, whether you save this Mazda’s thrills for a weekend or want to use it every day.

Just the feel from behind the wheel is all the reason you need to sign on the dotted line, so it’s really just an added bonus that the MX-5 looks as good as it does and comes so well-equipped.