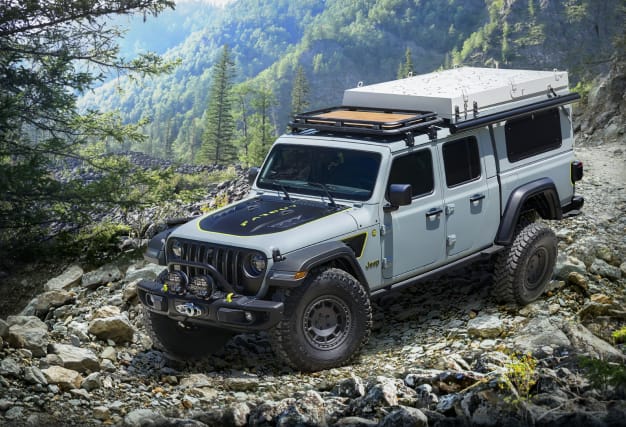 Jeep has revealed a new concept called the Gladiator Farout.

Essentially an adventure-ready version of the firm’s pick-up, the Farout follows on from the Wayout concept released in 2019. It was originally intended to debut at the Moab Easter Jeep Safari in April, but due to coronavirus-related delays hasn’t appeared until now.

Its main feature is a contained and deployable rooftop tent. Measuring 16 foot long and 7.5 foot wide, the space can be opened and retracted in seconds. Once in place, it offers enough sleeping room for four people.

Inside, it features a fully functioning stove and fridge, as well as hanging storage racks and built-in seats. There’s even soft ambient lighting.

The exterior of the car has been beefed-up too, with new accents on the bonnet, springs, badging and tailgate tow hooks. It also features a performance two-inch lift kit for better ground clearance, as well as 17-inch wheels shod in 37-inch mud terrain tyres.

The Farout concept is powered by a 3.0-litre EcoDiesel V6 engine, which produces around 260bhp. As yet, there are no plans for the Jeep Farout concept to be put into production.