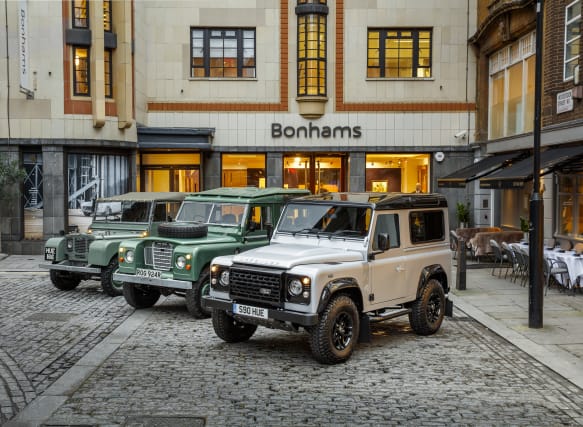 Since its inception in 1948, the Land Rover has earned a reputation as the ultimate off-roader. It was designed under the premise of being an all-purpose vehicle that could conquer any terrain.

It quickly became a success, and was gradually updated throughout the years. This year, Land Rover has finally introduced an all-new version, bringing more creature comforts to its iconic off-roader.

Here we take a look at how an icon grew.

The Land Rover was launched at the Amsterdam Motor Show on April 30 and it would later become known as the Series I. It had a 50bhp 1.6-litre engine from the Rover P3 and had a pick-up body style.

After a year, 8,000 had been built and the British Army ordered its first trial cars, while selectable two- and four-wheel-drive was added in 1951. In 1952, the engine was increased to a 52bhp 2.0-litre unit, while a new long wheelbase version was added.

The second generation model was introduced, featuring a new but recognisable look and a 2.25-litre petrol engine, before a facelifted version brought a 62bhp 2.3-litre diesel.

In 1962, the Forward Control model was launched with new petrol and diesel engines, focused on being a real workhorse. Just four years later, Land Rover production broke through half a million vehicles.

Another new look Land Rover is launched with a plastic grille, flatter door hinges and a full-width dashboard. To demonstrate its accelerating popularity, production hit 750,000 in 1971 and then one million by 1976.

In 1983 the Series III underwent some modernisation, with a new One-Ten model being introduced, leaf springs being replaced by coils, and four-cylinder engines that got a full synchromesh five-speed manual gearbox.

The next major milestone didn’t come until 2007, with a major update bringing a new four-cylinder turbo-diesel engine with a six-speed manual gearbox, updated dashboard, and new body styles.

In 2015, Land Rover celebrated ‘The Year of the Defender’ with three new Limited Edition models being launched as well as recreating the Series I production line in Solihull. Production finally came to an end in January 2016.

Some purists were disappointed to see the interior move upmarket as the traditional model was known for being easy to clean when being used as a true workhorse. But the new Defender boasts some of the most advanced off-road technology ever fitted to a production car to make it capable on any terrain, while also being pleasant inside for families who want a practical SUV.