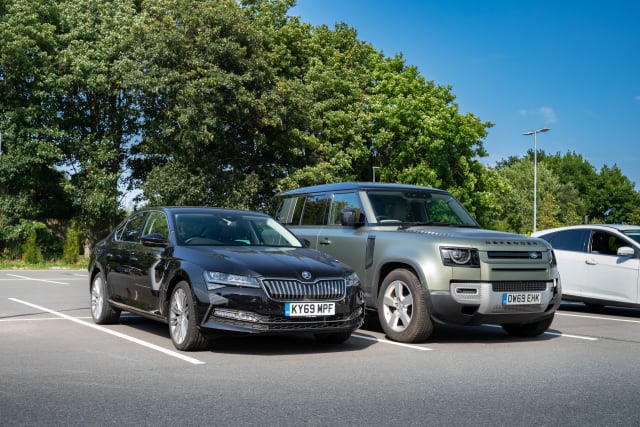 We’re approaching almost half a year since we took delivery of our long-term Skoda Superb iV, the plug-in hybrid version of the Czech firm’s executive car.

However, because of lockdown, it went largely unused in the first few months of its time with us, but as we discussed in our report last month, it has been quickly winning us over.

With lockdown measures easing, the Superb has been called into use much more often, where it has been confirming that our initial positive impressions were well-founded – while a few little issues have also arisen.

A deluge of short-term test cars meant the Superb had been left unloved for a couple of weeks. But a day trip to London with the family made the Skoda the perfect car to call on, thanks to being comfortable, spacious, and having an electric motor to call on when traffic snarls up in the capital.

Being a plug-in hybrid it has a decent-sized battery, so there’s no worry about leaving it for a while and wondering if it will even start.

The positives first – with three adults in the car, everyone has all the space they could ever need. The rear passenger had a lot of leg room and the front passenger still had plenty of room to stretch out. Meanwhile, the boot is so huge it swallowed a picnic box and a small suitcase with acres of space to spare.

Everyone on board appreciated the ride quality, too. It’s just so comfortable and it’s really one of the best cars for long-distance motorway drives. The Superb came into its own on the trip home, with the late night traffic light and the cruise control set it just wafts through the miles in sumptuous comfort.

While my experience with the Superb has been largely positive, a couple of longer trips have given rise to some minor annoyances. In the first report I mentioned that the car tends to default to EV mode rather than hybrid, so it has a tendency to drain the battery early in a journey if you forget to switch modes.

I had found another complaint with the hybrid system, but it’s now resolved. The problem I had was that I hadn’t found a way to use the engine to recharge the battery, or hold a minimum battery charge so you can deploy the battery closer to your destination.

I’ve since discovered that you have to put it in hybrid mode, then deselect auto. This then brings up arrows next to the battery charge display so you can set a minimum charge amount. This isn’t immediately obvious – it’s taken me months to find, but that could be on me – and feels like something a dealer could easily skip over when the car is bought.

It can make a huge difference to economy, because you can stick to engine power on the motorway then deploy the battery in the city. On my run to London, before I learned this trick, the battery had fully discharged within half an hour, so by the time I arrived in the capital with the slow moving traffic I had to largely rely on the petrol engine, which made the fuel economy worse than it could have been.

Elsewhere, the air conditioning system isn’t great at regulating temperature. In most cars, I tend to set the temperature to around 22 degrees and put the climate to ‘auto’ to let the car do the work, with the fans eventually dying down once the temperature has been reached.

However, I’ve noticed the Superb seems to struggle with this, continuing to keep the fans blowing cool air at a high rate into the cabin for your whole trip. It’s frustrating, because I have to keep fiddling with the temperature and fan speeds to get comfortable. A minor irritation, but a basic thing that should just work.

Speaking of minor irritations, the gearbox is slow to engage reverse when you’re coming out of drive, which makes quick three-point turns in busy areas tricky. And with that, you can tell there aren’t too many things to complain about with the Superb.

Overall our time with the Superb continues to be positive, and its ability to waft you and your passengers for miles on end more than makes up for the small issues you’ll encounter. The hybrid mode complaint does hold some weight, because it further confirms that if you do a lot of motorway miles you’ll likely still be better off with a diesel. And honestly, if you spend a lot of time driving in town, the hybrid system can work brilliantly, but the Superb might be an unnecessarily huge car for the task.

With another long trip on the cards I’ve just remembered I haven’t topped up the batteries. I’ve been averaging about 50mpg when I do top the batteries up, so it will be interesting to see how bad that will be doing 150 motorway miles with zero battery at the start. Watch this space…