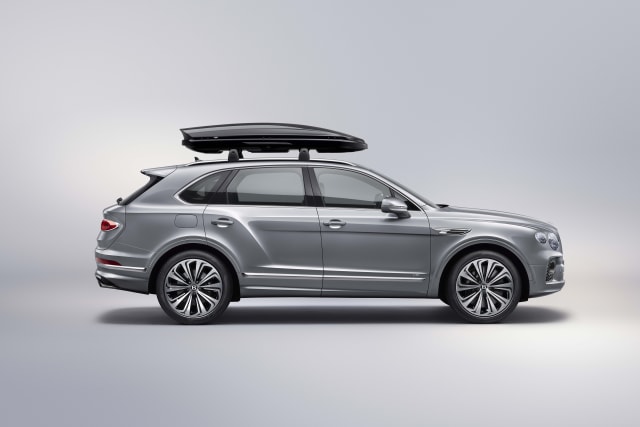 The highlight is a new sports exhaust from renowned tuning firm Akrapovic, which is lighter than the standard system and produces a much more aggressive exhaust note.

Made from titanium, it removes the central silencer, which should lead to a considerable increase in sound. Akrapovic engineers worked directly with Bentley to design the exhaust specifically for the Bentayga.

The four packages are called Exterior, Interior, Touring and Protection. The Exterior pack includes the new sports exhaust, as well as gloss carbon-fibre mirror covers and a fixed side step, which gets a rubber tread for better grip.

Interior, unsurprisingly, is designed to improve the luxury in the cabin, including leather-trimmed scatter cushions, additional footrests with deep pile carpets and a bespoke luggage set.

The Touring range is designed to provide more luggage space than the standard 484-litre boot. It adds a roof-mounted storage system that includes a 320-litre roof box, and the ability to carry up to three bikes or six sets of skis. In the boot, it adds a multifunction drawer beneath the boot floor to secure valuables.

Bentley announced in late July that production of the new Bentayga was back to 100 per cent following pandemic-related factory shutdowns. Deliveries will begin soon.